Death of a salesman, birth of an FM 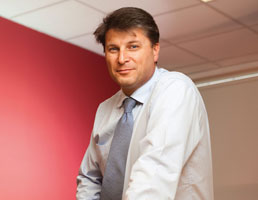 Ten years ago, a double-glazing salesman from East Anglia took a bold and unusual step, exchanging the calm of Cambridge for the swirl of Sao Paolo. Now, Chris Hare talks about his love of life in Brazil and his fondness for his new career in FM

Life has taken a few twists and turns since Chris Hare, vice-consul at the British Consulate General in Sao Paulo, first met his Brazilian sweetheart back in June 1985. He was a 26-year-old businessman working in his own company set up with a partner. She was attending a language school in his hometown of Cambridge.

But she returned to Brazil in the October, leaving him to think hard about the future. After doing just that, "I went to Sao Paulo to collect her and bring her back", says a smiling Hare, looking a good decade younger than his 47 years. "It turned out that was a pivotal moment in my life."
Hare was recently visiting the BIFM offices in Bishops Stortford to seek closer cooperation between the BIFM and its counterpart, the Brazilian Association of Facilities Managers, Abrafac, of which Hare is now director of international relations. He is 18 months into his first job on the client side as management officer at the British Consulate in Sao Paulo. The challenges have been many, not least being lead on transport and accommodation and support on security during the Sao Paulo leg of Gordon Brown's recent visit to Brazil.

His years on the road as a contractor means Hare is acutely aware of the subtleties of client-contractor relationships and has firm views on who should maintain control. That road, which led to his current FM position, has been a real "voyage of self-discovery", he says. But well worth the effort. "I really do love FM work, even though I know it sounds cheesy to say it."

After marriage in 1986, he and his wife settled in Cambridge, had two children and he continued to work at his double-glazing business, contracting work to domestic and small businesses, often dealing with FMs. He finished a BSc in building surveying at Cambridge Polytechnic University in 1995 and in 1996 sold out to his business partner in an amicable deal over issues of where to take the business.

For the next three years he continued to look after his domestic clients in the Cambridge region, and also worked as a surveyor and consultant to other glazing companies until decision time arrived in 1999: stay in the UK for the next ten years because their oldest child was about to start secondary school, or take the plunge and move to Brazil.

"After ten years of thinking about it, it was now or never," he says recalling the decisive moment. "We sold the car, rented the house and with only the money in our pockets we got off the plane in Sao Paulo," he says with a smile. "It was daunting, frightening but strangely exciting."
Family is everything in Brazil, he explains. He soon took a job as a salesman in a company owned by friends of his wife's family, selling high-end catering equipment for Emplarel, and in the next five years worked his way up to national technical support operations manager.

"It was everything from popcorn machines for cinemas to commercial ovens for kitchens in HQs of multinational corporations." He trained and supervised technicians throughout the country.

"I have always been customer focused" he says. "During my years in business in the UK I had many situations where I had to swim against the tide of spiel from other salesmen and carefully explain to a potential customer why what they were asking for was not going to give them the end result the were looking for. If you are in business for the long haul you have to be honest with your clients. I turned down work if I knew we couldn't deliver results. At the end of the day this would build long-term relationships."

A taste of FM


A move to property managers Cushman and Wakefield (C&W) as Sao Paulo regional manager was his first real taste of being an FM and facing their problems.

As part of C&W, Hare would go into a client's operation to problem-solve. "But I noticed that as other people would hang their heads when presented with a difficult problem, I got so very focused and shifted into problem-solving mode. That's why I love FM."

During his time with C&W Hare had the opportunity to work for several clients. One memorable project was the review of logistics operations for the Brazilian office of an international medical supplies company. He produced a project restructuring order processing, streamlined documentation and saved upwards of 40 per cent of departmental spend. At a global data processing firm he had to deal with the painful effects of losing part of the contract to a competitor and prepared the restructuring and downsizing of the C&W operation. At a telecoms business he handled physical security management. As an interim FM as a cosmetics business Hare laid the groundwork for a major renegotiation of the outsourced restaurant contract
Hare acknowledges that he is not a specialist in any particular area of FM. Most of his FM work has been to restructure departments, personnel, contracts and supplier relations for more efficient running. "I've had to drill down and look for savings," he says. "Many times the client is incredulous that such monies can be saved after they had been spending so much of it in the past several years."

There was great satisfaction in doing a job well-done, he says. But at the back of his mind was always the knowledge that as an outsourced contractor/consultant he was always seen as an outsider to the organisation. "As a contractor I was often seen as the enemy, carefully watched, not talked to and as someone to keep information from. I was always under pressure from my own C&W management and the senior management of the client to produce results in the shortest time possible, but this was often made difficult by the interfaces I had with the client's team at an operational level. Over the years I found that many of my ideas were more suited to the client side than the provider. In effect, I wanted to be the client."

It is, he relates, that "in-built bias" that comes with the contractor's territory. "I was also aware of contractors' conflict of interest." He had to "jockey for a moral position" within his own mind of serving the interests of his employer and those of the client. Hare is not afraid to say that he has a hard time with the concept of partnering. It can be a minefield for an FM who must maintain a constant vigilance over intellectual ownership, a first and major casualty of many perceived successful partnering contracts.

"You should not outsource intellectual processes, for example development of software for M&E maintenance. If it is even part-developed by a contractor in isolation and that contractor leaves, who gets the software and the corporate history contained therein?" He has faced a situation where the long term relationship with a contractor using the contractor's management software has produced a situation where his client was not prepared to change contractor even though significant savings were available, the possible negative impact on operations through the loss of historic data was simply not considered worth the risk.

Yet he is not unsympathetic to contractors' needs. After all, he was once one of them. It is about effectively managing the supply chain and managing it over a longer period that two or three years. That is what is exciting about his current position as vice consul in Sao Paulo, he says.
He joined the Foreign and Commonwealth Office (FCO)in January 2008 with responsibility for restructuring internal services including two satellite consular offices in other cities. The main office is a rented entire first floor of the British Brazilian Centre that houses other UK organisations including the British Chambers of Commerce, the BBC and an English language school. His consular office employs 60 people, of which 20 report to him, while Hare reports to the consul general (his internal client) and to the director of corporate services based in Brasilia (his line manager).


Hare has worked on all-Brazil contracts for mobile phones and office supplies, completed office reorganisations and also has responsibility for helping UK nationals in distress. But his "baby", he says, is the development of a travel-booking software package for all of the FCO's Brazil operations. Together with his DMO Andreia Ponce he is working with a Brazilian software supplier to create what they believe is a unique solution to travel management, and are currently putting the concept through its initial tests. Although the solution will be commercially available once fully developed the main reason behind the FCO's strategy is to have ownership of their own historical data by not using the management software bundled into most contracts for travel procurement.

The system will treat every international airline ticket purchase as a separate contract bid between three preferred bidders. This will ensure constant value-for-money. Also, the results of each supplier's performance will be reviewed once a year and the least well-performing one will be replaced with a new contractor.

Hare's appointment also signalled a change in attitude by the FCO towards FM and the professionalisation of their management services. Historically his role was performed by staff on secondment from the UK and rotated every three or four years: "As an organisation, the FCO has a phenomenal aptitude to accept change," he explains. "It looks back at it organisational behaviour and structure and is not afraid to change to find a better way. Before me, the person in charge of FM was around for three years at most usually. With my appointment as a local employee we hope there will be a continuity of management and strategies."

Hare says he is not going anywhere soon. He loves the Brazilian culture and speaks the language. He also greatly likes the outdoor life afforded by its climate which allows him to enjoy his hobby - orienteering. Finding his way, he says, has been his speciality.