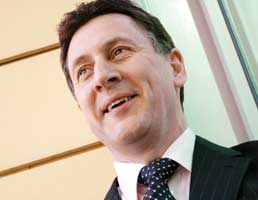 As a schoolboy, the reason that Steve Davies got out of bed each morning was to kick a football. After all he showed promise of turning pro, being selected for Wolverhampton Wanderers’ under-16s team. Although he knew that a career in the game was still a long shot, once his family moved far from the Midlands to a village near Porthmadog in north Wales it was clear that his teenage dream of playing for Wolves was not to be.


But sport is about teamwork, something that Davies has come to recognise as essential in all walks of life, not just running after a ball. Although he still does that, as well as play county badminton, squash and tennis. He sees teamworking abilities as the biggest asset he brings to his new job as managing director of Eurest Services (FM).


Prior to joining Eurest Services in January, he was with Reliance FM as operations director. His last job there was a two-year secondment as transition director on their joint venture company Monteray. It was a new business put together with Carillion FM – a 51 per cent share – and Balfour Beatty Workplace. Both BBW and Reliance have 24.5 per cent shares.
Monteray handles property FM for BT’s 7,500 UK sites, from isolated Scottish buildings to their BT Tower in London. More than 2,500 people Tupe’d over to Monteray, one of Europe’s largest such reorganisations, explains Davies. “We had three different cultures among us, as well as having to bring in Mitie personnel who managed BT’s Scottish properties,” he says.
“If there was one thing that I learned well it is that you achieve everything through people. When times are tough, it’s people you trust and rely upon to get you through. I used all my skills to ensure team-building.”


But Davies also has an ingrained desire to serve the customer and get results for them. That, too, comes from his sports background. “And that is what now gets Steve Davies out of bed in the mornings,” he says. After getting his A-levels in maths, chemistry and physics, his careers advisers pointed him towards a new type of university degree in the UK, that of sports science. He graduated with a BSc in sports science from Crewe and Alsager College of Higher Education (now part of Manchester Metropolitan University) and went straight into local government as a sports coach at a leisure centre where he spent “40 hours a week in a track suit”, helping people of all ages, old and young.  The emphasis was on ensuring they enjoyed their activities as part of customer satisfaction.


Davies also knows something about being Tupe’d. He was assistant director of leisure at the local authority in Reigate, Surrey, when compulsive competitive tendering was introduced. He ended up with Civic Leisure, then part of Queens House Moat Hotels, in 1989 and stayed with them for a decade. Davies moved up to be operations director on the management board for what became Cannons Group with responsibility for 85 private health clubs and more than 100 local authority leisure centres.


It was a move to Serco as operations director for their leisure division in 1999 that opened his eyes towards a career in FM, he says. “I saw there were so many synergies between leisure management and FM.”


He was also selected as one of 12 Serco employees to take a two-year diploma in company direction, set up by the Institute of Directors. The study was based as Serco offices and included site visits and weekend retreats, all leading to chartered director status.


He left Serco in 2003, bound for Reliance and the Monteray secondment, and joined Eurest Services in January. He joined Eurest Services, he says, because he considers himself “a service professional” above all else. “I’ve been fortunate to have two careers, one in leisure management and now one in FM. The challenge for me at Eurest Services is that it is already well known as a food services provider. But we do so much more and we have to let people know that.”


The strategy for Eurest Services is to move more into bundled services but not to abandon its catering excellence, he explains. “We start from catering, our core, and the move into the soft services such as cleaning, front desk, security ad grounds. The goal is integrated FM.”


Most growth is likely to be with existing clients and that means a lot of communication with them about the advantages of bundling. Davies is also aware that clients will have to trust that Eurest Services can deliver what they say they can and to the standards they claim.


“Our strengths include our hospitality ethos grounded in customer service. Also, the Eurest Services Compass Service Framework is there for all employees to use. Wherever they are globally.” Employees can see online the standards and procedures for delivery, no matter which country they are in.


The geographic point is important because Davies sees the UK FM side moving more offshore to mainland Europe for its market growth. Getting that growth will be a hard-won thing under current market conditions, even though things are improving. Davies doesn’t see too many FM competitors throwing themselves at potential clients with unattainable promises of service at ridiculously low prices.


“FM is too mature a profession for that now for firms to make such silly offers,” he says. “It may be a bold statement to make, but I would rather shake a potential client’s hand and walk away with no deal than make such a promise.”.