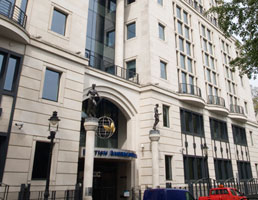 There’s something missing from the London HQ of FTSE100 firm British American Tobacco. And it’s not until I’m back on the busy London street that I realise what it is. Cigarette smoke. From the giant posters displayed around the building depicting tobacco products to the stacks of cigarette boxes ready for serving in the fine dining suite, cigarettes are everywhere in the building. But there is not a whiff of smoke.

It used to be commonplace for staff and visitors to smoke in Globe House – under the smoking umbrellas in reception or even at their desks. But since the July 2007 ban on smoking in enclosed public places it is less visible in the building, but clearly just as integral to the business.

The ban prompted the creation of dedicated external smoking facilities at the 190,000 sq ft building which meant that head of facilities Phil Hepburn and his team had a blank canvas to create what must be some of the most luxurious outdoor smoking facilities in the capital. On the second, fifth and eighth floors of the building in London’s Temple district, a covered decked area with glossy plants and top-of-the-range patio heaters, which wouldn’t be out of place in Living etc, allows employees to smoke uninhibited. And an adjacent vending area gives them that most coveted commodity: a coffee during their a fag break. “As a tobacco company we didn’t want people being photographed by the media smoking outside the building, and wanted to give staff and visitors as much comfort as is allowed within the constraints of the legislation” says Hepburn.

The one rule, adds security services manager Richard Steel, is that people aren’t allowed to use their mobiles on the terrace – it’s a quiet zone. “The neighbouring building is quite close, so we didn’t want to alienate our neighbours with people shouting on mobiles, yards from their windows. And there’s a confidentiality issue.” The result is a meditative environment where people smoke with a concentrated air of enjoyment – without the usual guilty look of someone escaping from their desk for a swift puff. It’s all rather reminiscent of the 1950s ads for British American Tobacco brands such as Lucky Strike and Pall Mall which promised sophistication, sex appeal, and even longevity.

Despite the high-profile smoking facilities (there are signs directing staff to the nearest smoking area throughout the building), the number of employees who smoke at British American Tobacco –  the second largest tobacco company in the world – is broadly similar to the UK national average, says Hepburn.

The professionalism and attention to detail displayed in the smoking areas is visible as soon as the visitor walks into reception. The 22-strong reception and security team are outsourced to different suppliers but act as one team and are all SIA-licensed. “We want to have the feel of a five-star hotel reception not a corporate office and didn’t feel we would get that from traditional security guards,” says Steel. “But by blending security and reception, we achieve the right chemistry of a top level of customer service and a strong security presence.”

Hepburn concurs. “I wanted visitors to have the same greeting whoever delivered it. Directors Table are strong on customer service and Ultimate are strong on security and so merging the two creates the complete package.”

British American Tobacco outsources its entire FM function – only Hepburn, Steel and Sue Stubbs, the facilities office manager, are directly employed, together with a team of chauffeurs. But Hepburn believes in the one-team approach, whoever pays your salary. “I want everyone to understand that if there is a facilities problem, it’s everyone’s problem, not a catering problem or a security problem but is all our responsibility.”

There are 850 permanent staff based on 1,067 desks across eight-floors in Globe House, with two floors taken in a nearby building for a specific project which started this year and is expected to finish within three years. The ground floor is largely given over to the FM team, the generously-proportioned reception, a Costa Coffee, a fully-subsidised staff restaurant (drinks vending it also free for staff) and in-house shop. The top floor is for the directors offices, fine dining (complete with grand piano) meeting facilities and the requisite smoking terrace with jaw-dropping views over the Thames.

Space is at a premium in the building says Hepburn, »    « hence the decision to take extra space nearby. But he is determined to avoid “mission creep” and strictly controls who uses the extra space and why. Despite a number of senior managers being regularly out of the office visiting factories (British American Tobacco has 49 factories in 41 countries) hotdesking hasn’t really taken off at British American Tobacco – although it’s a key issue for the FM team. “Pushing gravy uphill” is how Steel succinctly describes the space issue – a lot of roles which don’t have to be based in London, manage to find themselves in Globe House because of individual preference – and the standard of the FM provision, no doubt.

For the time being the FM team have their hands full with some major M&E projects. The BMS system is obsolete and is being replaced – the current system is unique and there weren’t enough skilled people to service it. Once the new BMS is in place, Hepburn plans to do a thorough floor-by-floor audit of the building’s energy use with the aim of then reducing it.
The lifts are also being gradually replaced – again because the lift controllers were obsolete – a process that Hepburn describes as “painful and emotive”. So controversial are the new destination control lifts, that a vibrant Facebook group called Let’s Bring the Old Lift System Back to Globe House has 89 members – several of whom have used the discussion board to claim that the new lifts are “an HR plot to get people to talk to one another”.

The new lifts, when they are completed next year, will be energy efficient and include LED lights with a time sensor to switch the lights off when not in use.

The nature of British American Tobacco’s business – producing a product that is as controversial as it is popular – means that the organisation faces some security threats. Most of the activity, from the likes of anti-tobacco campaigners focuses around the AGM, held in the late spring in the nearby Mermaid Theatre. Protestors tend to hand out protest cards (Unlucky Strikes) but a hearse has turned up complete with wreaths and there was an incident with empty shoes placed outside the venue representing youth deaths as a result of smoking. “It’s a constant reminder that we work in a controversial industry,” says Steel.

“But the protestors are good-natured on the whole and are properly policed and marshalled.” The AGM is held away from Globe House, both because it needs more space than the building can provide and also because the organisation doesn’t want staff adversely affected by the campaigners.

British American Tobacco also has some controversial neighbours including the Institute of Strategic Studies, occasionally frequented by Afghanistan’s President Hamid Karzai, meaning that Steel and his team have close relationships with the security services and police. Steel is a panel member of the Strand and Whitehall Neighbourhood Police team and works with the police in setting and measuring their objectives in the area.

The key to good security is integrating security and facilities, says Steel, who reports into Hepburn, and has been with the organisation for more than seven years, previously working for investment management firm Cazenove and Sky TV. His remit extends far beyond Globe House. The safety side of his role means that if a British American Tobacco employee is organising an external event or staying overnight on business, Steel and his team risk assess the venue or hotel looking at, for example, whether the security is suitable to hold confidential meetings, and at issues such as fire precautions.  “We have a duty of care to our employees which extends beyond the office walls,” he says.

Echoing this concept is the series of talks Steel arranges for employees from everything from ID fraud and theft to drugs awareness from speakers from the police, fire and intelligence services.  “We see ourselves as a service to the building and the people in the building; if we can give them good information and advice both in relation to their time in the building and outside, then we feel we’ve achieved our objectives.”

The building has a rich sense of this history, with tobacco-related artefacts displayed on every floor. It is a strongly paternalistic and traditional organisation – as its fully-subsidised catering facility, one-to-one desk ratio and high levels of FM delivery and service show. And as the lift protests demonstrate its staff are zealous defenders of this history and their building.
But there are signs of modernisation. The marketing team have broken away from the constraints of uniform furniture and have worked with the FM team to turn an office into a garden shed, complete with fake grass, to create an innovative environment for thinking up new ideas. And the fully-subsidised catering, which is very unusual in today’s  environment, is about to be changed. Globe House will be a very different working environment within 10 years, but today it is a bastion of excellent FM delivery.