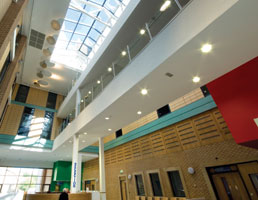 A committed group of employees, with support from the Eric Wright facilities team, has helped the St Peter’s Centre, a combined primary care and leisure facility in Burnley, to improve its DEC rating by over a quarter in the past year


Following an FM World article about LessEn, the use-less-energy campaign from the Urban Land Institute, several organisations came forward with positive energy reduction stories to tell. One of these was from St Peter’s Health Centre in Burnley, where a committed and enthusiastic group of employees has worked with the facilities team to bring about a significant change in the use of energy resulting in the centre improving its DEC rating by over a quarter in just one year.

The St Peter’s Centre, in the centre of Burnley, Lancashire, is a combined state-of-the-art leisure and primary health care facility housed in one building, which extends to nearly 20,000 sq m.

The leisure centre includes two swimming pools, a fitness suite, a health suite, a café and sports halls. The primary health care centre houses a wide range of services over nine floors, including an out-of-hours GP service, clinics ranging from orthoptics, occupational therapy, physiotherapy and musculoskeletal through to dentistry, speech and language therapy, sexual health, retinal screening and audiology. District and school nurses, community matrons and visitors for the area are also housed within the centre.
Burnley was identified as one of the government’s spearhead areas due to a high level of health deprivation in the city. St Peter’s has been a key tool in tackling the health inequalities in the area. The centre, which is a joint project between Burnley Borough Council and the local Primary Care Trust, was designed and constructed by developer Eric Wright Group and was completed in 2006 at a cost of £29m. The mix of health and leisure facilities is thought to be the first of its kind in the UK and was procured under the LIFT model (Local Improvement Finance Trust).

The Eric Wright Group will deliver facilities management services to the health centre for the remaining 23 years of the lease period while the borough council maintain the leisure centre.
When the centre was built, energy efficiency was a significant consideration. The project was designed and constructed within a very short timescale to meet the requirements of external grants. As a result, the project team were faced with some financial and programme restrictions. Construction commenced in January 2005, with the leisure element to be completed by March 2006 and the health element by September of that year. In 2009, the health centre received a Display Energy Certificate (DEC) rating of 112, which put it in the E category.

Changing mindsets
The team started to consider all the areas in which they could reasonably improve energy efficiency. It was clear that although highly efficient lighting and plant had been installed, one of the biggest challenges would be to change the mindset of the people using the building every day.

The Eric Wright team, led by Blair Fotheringham and his assistant Paul Truby, set up a user group within the health centre involving employees from all departments. Regular meetings to discuss operational issues were organised and the campaign to reduce energy started with support from the Carbon Trust in terms of providing ‘please switch off’ stickers.
The stickers and posters were very effective. Many of the 500 staff at the health centre use a computer, and by reminding them to switch it off at the end of the day, the team were already starting to make an impact. The team also installed PIR motion sensors to minimise lighting usage. The response was very positive, which suggested that placing responsibility with staff increased their commitment to the initiative.

As well as involving employees, Eric Wright further enhanced the building management software that has allowed them to fine-tune the controls for heating, ventilation and lighting. The above measures have allowed the FM team to gain a greater control of the building’s core temperatures.

Finding the optimum set points and heating/ventilation levels in any new building takes a lot of time and effort and it is important to keep reviewing the settings as operational changes take place on a weekly basis. The team has to be particularly careful due to the building’s health centre function in which people are under regular clinical assessment. The key is to find the right balance with the internal air temperature.

The results
St Peter’s Health Centre recently received a new DEC rating of 88, putting it firmly in category D, and well above the average rating for a building of this size.
The team showed the certificate to the user group and gave them  a like-for-like comparison over the previous assessment. It was clear that working collectively towards an achievable goal had captured people’s attention.

A large contributing factor to the improvement in the DEC rating was that the centre’s operational hours have significantly increased since it received the first DEC. This has slightly distorted the rating, but it  is still an accurate assessment of the building’s performance.
The aim is to continue to improve the energy efficiency of the building with the objective of improving the DEC rating still further. Year-on-year energy savings are encouraging, with  a 12 per cent saving in electrical usage and a 13.8 per cent saving in gas.

Further energy saving measures are being considered at the centre including LED lights in specific areas; voltage optimisation and solar panels with feed-in tariffs.

2006
year in which the site was completed