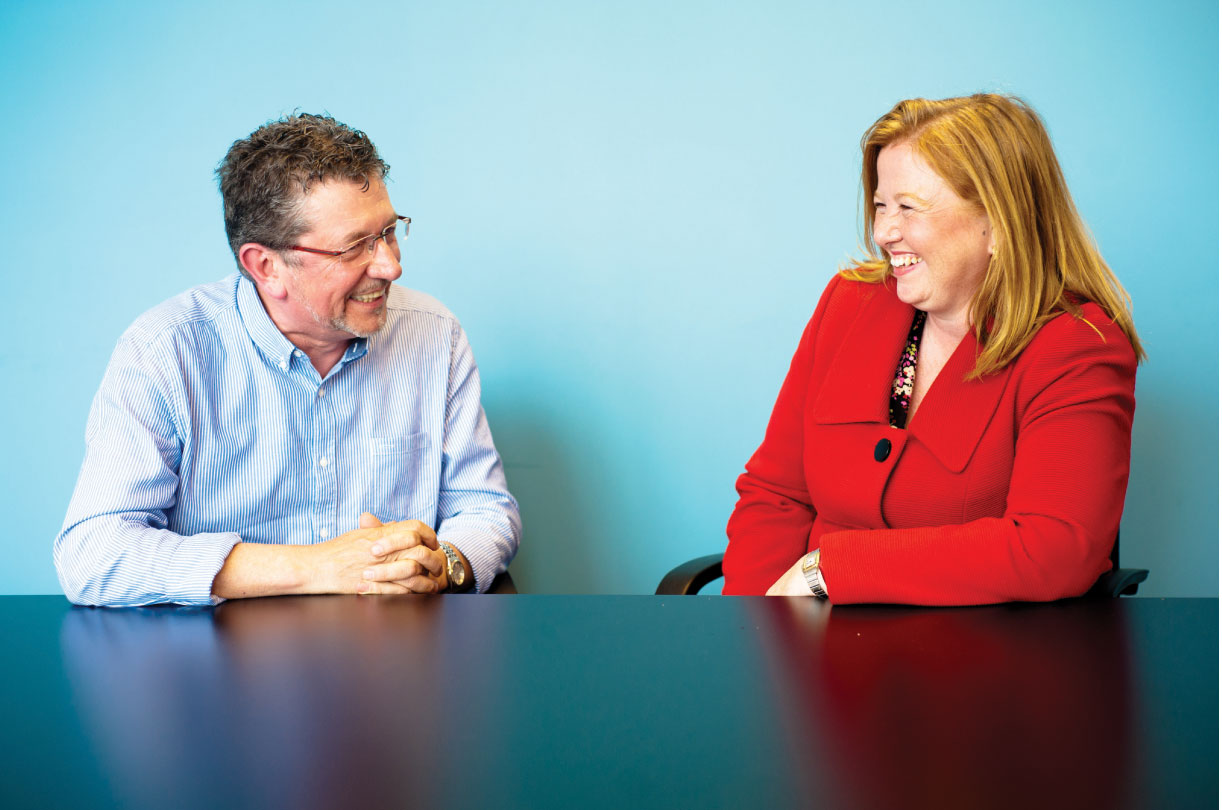 Martin Pickard is one of the industry's most recognisable figures, and a pioneer in its development. Here, consultant Lucy Jeynes asks him about going boldly where no FM...


Lucy Jeynes: So when did you first hear the term 'facilities management'?

Martin Pickard: Around 1980, I was working at British Telecom doing relocations and fit-outs. BT was on a big push at the time to move everything out of London and we were doing a lot of work with Herman Miller, which had been working with user groups in the US on what finally became the IFMA. So I heard this term FM, but it was clearly an American thing.

It wasn't until 1983, when Frank Duffy launched the Facilities Journal, with the famous rallying cry that "the occupier needs a voice" that I got really excited - because I worked out that FM was what I was doing and that it had a name.


Ultimately, that led to a group of us getting together and forming the Association of Facilities Management (AFM). The first meeting of like-minded souls was in 1983 and the formal formation of the AFM in 1985, but the dates fade. I know there were 35 founding members - all of us men, although Marilyn Standley joined soon after.

LJ: I didn't come across the term until about 1992. I'd been working for Crown Agents on the procurement side. It was starting a joint venture in the field of FM and wanted me to market it.


I'd never heard of FM and in 1992 we didn't even have Google to find out what it was. I had to see people physically and ask them what this thing 'FM' actually was.

MP: I remember when I was at the Post Office as building manager getting a letter from the director of the British Telecoms Building Management division saying that "there was not and would never be a place for FM in BT" - a decision made on the basis that FM was this strange American invention and that, in fact, they already knew all they needed to know when it came to managing buildings. Of course, it was just a new name for the stuff we'd been doing before.

LJ: In my case, the government had started compulsory competitive tendering so suddenly the procurement of these services was key.

MP: And that was when FM was just starting to be more about services. For the first ten years or so, FM was all about the design of the workplace, with very little ever said about management of services. But it's interesting that we seem to have come full circle now - everyone's talking about the workplace again these days - workplace design, agile working, all that good stuff. The 20 years in the middle was all about service provision and outsourcing. That's much less the case now.

LJ: Now it's all about what people need in the workplace rather than simply the maintenance of building assets. Crown Agents procured a lot of engineering, so we were just thinking we'd be able to do the same for the public sector, the universities, the colleges. Our focus was on looking after the assets; we didn't really think about the people.


But then soft services came in, and we were looking after the food rather than the people, the grounds rather than the people; pulling everything together around the people became the interesting part. That's why ultimately I ended up on the consulting side, because I'd realised that it wasn't anything like buying a commodity.

MP:  But there's still a lot of that going on - an awful lot of people who think FM is simply about buying the same old stuff off-the-shelf, one size fits all. FM has always been about the people, which is what makes it fab.


When I decided that delivering mail wasn't for me, I got a clerical job in the payroll office thinking that would be a proper office job. I soon longed to be back going around the building talking to people. I thought working in personnel would be about working with people, but it absolutely wasn't. Working in what was then called accommodation was about working with people. That is the thing at the core of FM. It's about helping those people to do whatever they do. The building is incidental to that.


LJ: I lecture on the BIFM foundation course and every month there are 25 new people on it. They are so keen and enthusiastic; the course is never the same twice because you never get the same question twice. I would say, though, that when we first started there were never any young people or women. The age profile has come down a good 15 years and it's a 50/50 gender mix now.

MP: I echo all that. I started training with Quadrilect back in the 1990s and we still do a lot today. The number of women is definitely up and there are a lot more people making a choice to be in FM as opposed to going off on sick leave and finding out, they've been given FM to do on their return. There was a lot of that in the early days.


But what do I like most about FM? The people. What frustrates me most about FM? The people! So many people just don't raise their eyes above the daily reactive stuff to understand what it is they could do. It's such a shame that you sometimes get these terrific brains in the sector who don't stay because they don't find it as rewarding and exciting as they should.
Many of the competencies prevalent in great FMs - interpersonal skills, communication, project management, admin, creativity, problem solving - are all really valuable business skills. If you show that you're really good at any of those things in a corporate, chances are you'll be bumped upstairs into something that's not FM related. We lose a lot of talent that way.


One of the reasons I went supply side was because I was never going to get on the board of a telecoms company and I had ambitions to be in the boardroom. If you have serious career aspirations in FM, the place to go is the supply side.

LJ: Looking back, is there anything that you'd have done differently?

MP: When I moved to the supply side, I was really fired up to set up an FM company that would deliver the kind of FM service I wanted when I was a customer: full of innovation and leading-edge ideas. I soon found out that actually what most people want is a safe pair of hands and reliable, consistent service.
That was a disappointment, and I went about it all wrong. I was full of evangelical zeal but as I've got older I've realised that people just want to get the basics right, and that just doing that is pretty difficult in itself.

LJ: Yes, that's one of the challenges we face: there are a lot of customers not getting the basic FM service they want.

MP:  and therefore developing a negative view of FM and what it can do for them. But we do ourselves no favours in this sector; we don't sell ourselves to business and society in the positive way we should. In fact, we spend too much time in little circles talking to ourselves instead of engaging with the wider business community. It frustrates me that people still don't get what FM can really do.

LJ: You've contributed to the development of various bodies in your time.

MP: Yes, as council member of the AFM, council member of the BIFM, president of the IFMA UK chapter, and so on. I perhaps regret putting so much effort into all that and not into promoting the profession beyond its boundaries. But at the time it felt like the right thing to do. Of course, the world has changed. The challenge for us in the 1990s was in telling people what FM was. People get what it is now, but the challenge now is to get those same people to understand fully what FM can really deliver.
It's exciting to track the growth of the sector through the qualifications structure. In the 1980s, myself, Gideon Meade and Graham Riche - the education committee of the AFM - trawled the country knocking on the doors of universities trying to find someone, anywhere, who'd be interested in running something to do with facilities management. They just
weren't interested - but now there's a great long shopping
list of options.

LJ: And FM is an accepted term now - you hear it on Casualty and Eastenders.

MP: Ah, but the challenge used to be that no one knew what FM was. Now it gets mentioned on television as you say, but you can bet it's some building manager taking a bung for messing up the air conditioning or something, and not a positive role model.

LJ: What do you see as the challenge for the next generation of FM professionals?

MP: They've got to sell the contribution of FM to the broader business community, government and society. Eight per cent of GDP is spent on FM and yet the government and business hardly seems to know we exist. We have a great professional institute and trade association, but compared to the size of thec facilities management sector they're still pretty small. If people can feel FM's contribution, then FM can start delivering on its potential - and that potential is huge. It should be a focus on outcomes - not inputs or outputs, but outcomes. What's the result of the stuff we do? If we can measure that, people will flock to it.

LJ: What would you have done if it hadn't been FM?

MP: There was a point where I had to choose between two professions - the other being a politician. So I would probably have been a political activist, journalist or elected member
of some kind.

LJ: You don't think you might come back to that later?

Career file - The rise and rise of a guru


Awards: Winner of two BIFM awards in 1996; Winner of the BIFM Award for Excellence in FM Journalism 2005 and 2008; Freeman of the City of London