What makes a Rising Star? 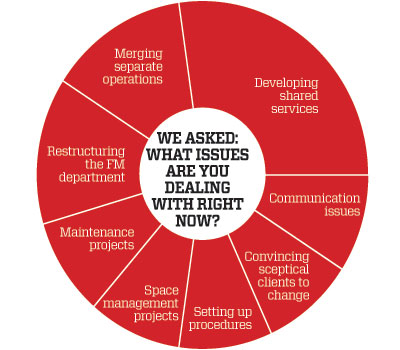 Here, we ask what conclusions can be drawn from our snapshot of the sector's current leading lights.

A cut above: Rising Stars of FM

It's in the nature of a search such as this that the resulting list captures people at different stages of their careers and with differing levels of responsibility.

By setting a notional cap of ten years experience in the sector, we were keen to compile a group of people who would show to those considering facilities management as a profession just what they could be achieving in a relatively short space of time.

Some made the list for the way in which they'd made significant projects bear fruit, others for the impact they had on their colleagues, and others still for the enormous responsibilities they'd taken on. But what was abundantly clear from all of the nominations was that three key attributes stood out, whatever the individual's role.

Problem solving
First was a capacity to think their way out of complex or suddenly manifesting situations and, second, the ability to communicate up to board level and across and down to customers and clients.

Indeed, when we asked our readers what they considered the top traits of a fast-moving professional in this sector, nearly a quarter of respondents cited the ability to form close working relationships as more important than all bar one other attribute.

The number one attribute, cited by more than half of our poll respondents, was an 'ability to formulate and introduce innovative working models'. This was reflected in our nominations, with more than a third of those proposed having brought some form of innovation to their roles. This could have been re-structuring their team, or even developing new software to bridge gaps in the way service is delivered.

It's interesting to note that many of our final 30 operational FMs were being lauded for the way in which they had seen an innovation through from gestation to delivery. 'Thinking on your feet' is one thing - 'seeing a project through' quite another. During the judging process, evidence of this cradle-to-grave thinking was highly scored.

Some people made our list despite the original stipulation that it would comprise strictly operational FMs. Sheer weight of nominations brought Dr Matt Tucker into a special guest star category for his determination and ambition to create a research voice for the industry. Tucker has developed a new MSc in Applied Facilities Management at Liverpool John Moores University, making LJMU the only BIFM Recognised Centre to deliver the institute's new level 7 qualifications.

Another non-operational FM, Tom Robinson, has worked at Mitie since 2006 but is now the company's head of training. His views on training - that it should emphasise people, not process - have resonated with many of the FMs with whom he works.

It's interesting to note that despite coming at FM from different angles, Robinson and Tucker were each nominated for the same fundamental reasons as their operational counterparts:
in Tucker's case, innovation through new ways of delivering his courses via social media, and Robinson for his communication skills.

Bringing it all together was plentiful evidence of an enthusiasm for volunteering, with a sizeable majority of our final list being members of the BIFM or FMA, and in some cases working on the committees for the BIFM's various special interest groups.

A last word for our judges
- Julie Kortens, Chris Stoddart, Samantha Bowman and the Rising FMs sig - for the giving their time in reading through the nominations. And finally, thanks to Polly Plunket and Chris Stoddart of Cushman & Wakefield for allowing us to use the Heron Tower for the reception: holding it in the building managed by the current facilities manager of the year was entirely appropriate.