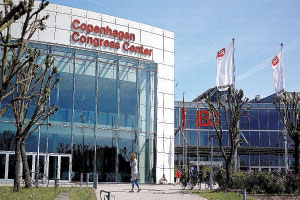 From Copenhagen, Cathy Hayward reports that Euro FM 2012 was a truly European affair, with subjects as mouth-watering as the cuisine. Oh, and there was a fashion show....

The food at last week's EFMC 2012 neatly summed up the conference itself: Serrano ham and chorizo from Spain; Nordic coalfish; Italian salamis; Danish brie from the host country; French wine; German rye bread; and even the beleaguered Greeks got a look-in with bowls of tempting Greek salad, all consumed over a diet of the English language. It was a true Smörgåsbord of European facilities management.


The queue snaking outside the Copenhagen conference centre was indicative of the popularity of the conference, with more than 700 delegates from across the continent (and a few from further afield) ensuring this was a record-breaking event - up from the 500 delegates in Madrid last year.

Perhaps encouraged by this popularity, EuroFM chairman Ron van der Weerd opened the conference in bullish style, arguing that facility management is not about adding value, "it's about there being no core business without FM".


Professor Michael Joroff of MIT's Department of Urban Studies and Planning began with an anecdote that demonstrated what can be learned in the wake of disaster.
The keynote speaker described how, in 1989, an employee of Bank of America, who was responsible for the company's disaster recovery and continuity management, had reacted when she received the call saying that the city had been hit by a devastating earthquake.


"She couldn't fly back, so we set her up with a place to work and several banks of telephones and computers. Remote working, shared facilities, integration - it was all there. That's when I saw the future," said Joroff, "9/11 saw the birth of agile working."


Joroff explained that organisations would need to be digitally connected and smart, thrifty (rather than just lean) and resilient. Dedicated facilities will be complemented by temporary (or pop-up) buildings because business moves so fast and existing structures cannot respond quickly enough, he added.


The challenge for facility professionals in this type of environment is immense, added Jeff Gravenhorst, chief executive of sponsors ISS in another keynote. He argued that both in-house and outsourced FMs needed to work together to understand the creative and strategic role they play within organisations.

"The most important role of a leader is to make sure people understand why they are doing what they are doing. Are you just fixing the air-conditioning or are you creating the right environment for the next invention?"


This was a trend weaved throughout the two-day event, especially in the two business tracks that sat alongside two research tracks.


Martha Takvam and Professor Siri Hunnes Blakstad, chief executive and head of workplace management respectively, in the real estate division of Telenor, a mobile communications firm in Europe and Asia, talked about the company's 2002 move from 46 locations in Norway to one building and the accompanying cultural change.

This involved flexible, open workspaces, space unassigned in terms of rank and better communications and information technology. Although this type of journey is well-documented in the UK, it was controversial in Norway and audience questions and reactions indicated that many in mainland Europe felt this to be new and challenging.

Ye olde home working
Many of us think of homeworking as being a new development, made easy by technology. But Niklaus Arn, managing director of space planners RBSgroup, argued that we are simply returning to how things used to be. "Three hundred years ago, work was fully embedded in the home and it wasn't until the mid 19th century that work left home because that's where the machines were."


Arn explained that by the time ICT had developed in the late 20th century, "work could leave the office and return home, or to any networked place." But he failed to note that this generally only applies to knowledge workers and that for those who work in factories, supermarkets and restaurants, not to mention facility staff in buildings, work is still a location.


Because of its abandonment, the office is now searching for an identity, said Arn. "We shouldn't be driving to the office to write emails, but we do that because it's in our DNA and our company's DNA." He said the workplace should be about face-to-face collaboration.
Yet collaboration is complex, according to a major study by Johnson Controls and Kristensen Consulting, which was presented by Dr Marie Puybaraud and Dr Kjetil Kristensen. The study, Collaboration 2020, on future expectations of the workplace, combined a 1,700 respondent survey with 26 strategic interviews across five industry sectors: life science, technology, industrial, oil and gas, and finance.


The researchers set out the practical implications of their findings for collaboration and the future of the workplace:


1. The function or role of the office and the physical workplace is rapidly becoming one of supporting collaboration
2. There is a gap between the current and projected needs of knowledge workers and workplace infrastructure
3. The use of video communication and real-time collaboration tools will increase substantially.

But not all workplaces are offices. And that was demonstrated in a fascinating presentation from Johan Stellingwerf, managing director of facility management services at Sodexo, and his client Tina Bergsma, director real estate contracting, KLM Dutch Airlines, which outlined the two-decade long relationship between the organisations. With a touch of the Eurovision Song Contest about the way the presenters handed back and forth, they ably demonstrated how a good FM service provider can support the core business.

Flying in the face of fashion
To enable cabin crews to feel comfortable at work, Sodexo redesigned the outfits, with the help of a Dutch designer, and made more than 11,000 cabin crew uniforms for delivery on one day. This project also involved upcycling more than 90,000 kilos of the previous uniform into jeans and creating a catwalk show of the new uniforms that wouldn't have been out of place at London fashion week. FM is clearly moving away from just cleaning and catering.


Despite some solid presentations, there was some greenwash in evidence. Leif Mollebjerg, senior director at Lego Systems, for example talked about the role of CSR within Lego, including how the business was purchasing renewable energy, without once addressing the core issue that the main Lego product is millions of pieces of plastic.


One of the highlights of EFMC is to hear from some of the more immature FM markets about their journey towards professionalising FM. Branimir Preprotic, FM co-ordinator for Pliva Croatia, a pharmaceutical company explained how prior to 2009, FM was mainly in-house in Croatia. But Preprotic and Pliva Croatia were instrumental in that changing.


The market is now more competitive as there are new entrants and prices are lower, said Preprotic, but challenges remain. "There is still no formal FM education, and FM is perceived as a non-strategic maintenance function."


Working for an employer with FM operations throughout Europe, and a speaker of several European languages herself, Helena Ohlsson, global facility manager at IKEA, was a natural choice for EFMC. Ohlsson described the experience of the journey from decentralised maintenance teams to a strong global FM team with excellent interaction within the furniture manufacturer.


But if the event was in danger of becoming too serious, main sponsors ISS had a bit of fun during one afternoon break with their staff breaking out into spontaneous (if rather well-organised) singing, much to the initial bewilderment, and then delight, of delegates.