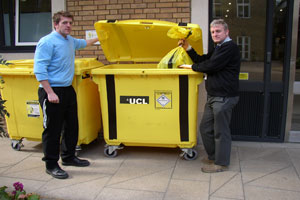 A partnership between Mitie's Waste & Environmental business and University College London has led to a dramatic shift in the way clinical waste is both categorised and processed.

For the heavily regulated disposal of healthcare waste, a high level of caution is required.

On the contract to manage the disposal of clinical healthcare waste and radioactive waste for University College London (UCL), a multidisciplinary university with 8,000 staff and 22,000 students, curiosity rather than caution has led to a significant new method of dealing with healthcare waste.

The approach has been lauded by the Department of Health, and quoted as being "best practice" in its revised waste-guidance document Safe Management of Healthcare Waste.

Mitie's Shane McAteer - employed on the contract as waste advisory manager - was charged with reducing the cost of sending 250 tonnes of clinical waste to be incinerated each year was.

He set to work with UCL's waste contract manager Paul Monk to understand the composition of the waste generated across the UCL campus. A comprehensive waste review was conducted in June 2009.

Forensic analysis
"The first thing we did was sit down and discuss the strategy for healthcare waste and radioactive waste management, to understand the logistical issues of waste management for a metropolitan university operating across multiple sites," says McAteer.

"We analysed everything, including the composition, the packaging, the frequency of waste collections from the various different sites - really getting into the nitty-gritty of how healthcare waste was produced, stored and transported, through to delivery at the waste contractor's site."

"I don't think anyone had really looked into the actual composition of the clinical waste before," says Monk. "It just got taken away and paid for. There was an assumption that it was exclusively clinical waste and that there was nothing else you could do but burn it."

It was the Department of Health's publication of Health Technical Memorandum 07-01: Safe Management of Healthcare Waste (HTM0701) that provided McAteer with a catalyst to get to grips with what was being categorised as healthcare waste at UCL.

Not so yellow peril?
This 'HTM' document brought in guidance on how healthcare waste should be classified. Says McAteer: "When the guidance came out, we knew we had to really understand what the composition of the waste was. At that point, UCL had a precautionary approach: a large proportion of the yellow bags were filled with both hazardous and non-hazardous wastes.

"Everyone assumed that everything going into the yellow bags must be contaminated," explains Monk, "but it was clear that a lot of what was going into these bags wasn't hazardous. When we opened these bags we were finding coffee cups and all sorts of other odd things that shouldn't have been in there."

One building had particular issues as a result of being so far from the centre of UCL's Bloomsbury campus, so it was here that McAteer and Monk started. They weighed out the composites of the waste stream, taking each element from the bag, literally laying out the contents and taking photographs.

As a result of this work, McAteer and Monk were able to put together a report detailing just how much normal waste was being treated with the same sensitivity and cost of the healthcare waste.

"At that point we started to get the buy-in," says McAteer. The process was then repeated right across all the other buildings and departments.

"We were saying: 'Don't throw that in there, it's alright to put that in the recycling bin', and they weren't sure about that. But once we'd had a couple of departments sign up, it was a lot easier to convince the others: a little bit of friendly competition."

"There was a lot of opposition originally," agrees McAteer. "We were asking them to consider what it was they were throwing away, how chemically contaminated it was, how infectious it was. That's quite a change in behaviour if you've been working in labs for a long time."

From waste to power
Says McAteer: "We'd identified waste that had been autoclaved [sterilised] on site that needn't
in fact have gone through the clinical waste disposal route. This was waste that could be re-classified as 'offensive hygiene' under the definitions in the HTM document".

At the time, Andy Stratton worked for UCL's waste management contractor Grundon (he's now commercial manager for Mitie's Waste & Environmental business). McAteer spoke to Stratton, explaining that he'd identified a waste stream that nobody thought was either hazardous or infectious - and asking if there was another route for it. The HTM document detailed a route for waste designated 'offensive hygiene' through which it could go to deep landfill. But because of its impact, landfill is not a preferred option."

"At the time, Grundon was building an energy from waste facility at Colnbrook, just west of the M25 motorway," says Stratton. "These facilities require permits to handle different types of waste, so we had it permitted to accept the 18-01-04 'healthcare-related' code. That then gave us a legally compliant and environmentally responsible route for the offensive waste stream. We were able to burn the 'offensive hygiene' waste and turn it into electricity."

Re-classifying auto-claved clinical waste from high temperature incineration (HTI) to energy-from-waste treatment was an industry first. Essentially, the work conducted at UCL has led to the Department of Health introducing new guidance, confirming that offensive hygiene waste can now go either to landfill or energy-from-waste incineration.

While waiting for the permit to allow for the electricity-generating incineration route, McAteer and Monk continued their work, introducing new ways of segregating waste and encouraging more recycling. This included work with UCL's preferred supplier for disposables and consumables to introduce new types of bags for the additional waste category.

New schedules were also developed for the drivers coming on site to pick up the waste to maximise their efficiency. This work involved McAteer producing a 'driver's pack', containing information on the site, the route, and photos of where the bins were and how to get to them. This led to a significant reduction in transport movements.

The way Mitie and UCL have changed how waste is dealt with has led to a saving of 18 per cent in disposal cost per tonne and a cut of 27 per cent in carbon emissions per tonne. The approach taken has since been recognised by the Chartered Institution of Waste Management (CIWM), which gave it its 2011 award for innovative practice in waste management and resource recovery.