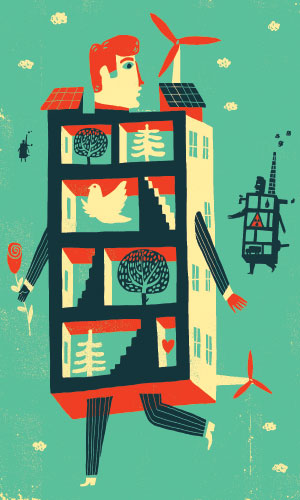 Rivers polluted with chemicals, dangerously faulty car designs... CSR has come a long way in the past 50 years. But what is the role of the FM in applying the new thinking?

Every time you buckle up your car seatbelt, you're being affected by corporate social responsibility - CSR. The manufacturer of the vehicle has installed the seatbelt for your safety, partly thanks to government regulations stipulating they must be installed.


For much of the 20th century, such concern by business for peoples' wellbeing wasn't a corporate priority. It took a pioneering book published in North America in 1965 to change all that.

Ralph Nadar's Unsafe at Any Speed: the Designed-In Dangers of the American Automobile detailed resistance by car manufacturers to the introduction of safety features, like seat belts, and their reluctance to spend money on improving safety.

It was Norwegian carmaker Volvo that, in the 1970s, first realised 'safety sells'. The company marketed its cars as the safest on the market, to the extent of crashing vehicles in their TV adverts to literally drive home the point. Safety continues to be a major selling factor for vehicles to this day.

Fast forward to 2012 and the idea of CSR is
well-entrenched in all areas of the business world. This is partly because of the legal battles won and lost along the way, in which organisations have had to protect themselves from costly litigation regarding responsibility for personal injuries.

But today's consumers of products and clients of services are also much more sophisticated and expect more than in decades past.

And they're getting it, according to the latest BIFM Sustainability Survey, for the year 2011.

As for organisations having a CSR policy, 90 per cent of respondents said one had been put together - up from 60 per cent in 2007.

But what exactly is CSR and who drives it within an organisation? Business in the Community (BITC), a UK charity focused on promoting responsible business practice, defines CSR as "the way a business integrates responsible practices concerning key social and environmental issues into its day-to-day operations".

BITC, with a membership of over 850 companies and another 10,700 companies engaged in campaigns globally, recognises the natural split between internal and external CSR. But the organisation prefers to talk about "responsible business behaviour" - corporate responsibility - rather than CSR.

The 'social' in corporate social responsibility suggests a focus on wider external and global issues at the expense of an organisation's internal responsibilities, with regards to the workplace, for example.

The BITC set up Workwell, a coalition of businesses committed to ensuring a healthy workplace, from physical safety to mental health.

"We take a holistic view of the workplace," says Grace Mehanna, campaign manager for Workwell. "Employees expect more from their employers, including healthy physical surroundings, good lighting and workplace layout and an environment that encourages interaction among people."

Most employers view it as an HR or occupational health remit. But FMs are central to making it happen, she says.

CSR has proved to be a useful vehicle for getting FMs more involved in business strategy - if not in setting it, then at least in keeping it on course, says Lucy Black, a committee member of BIFM Sustainability Sig since 2004 and chair since 2010.

Whether FMs are the best people to lead an organisation's CSR strategy is another matter, she says. It depends on the FM's background and knowledge of the subject and what can and can't be done to move the strategy along.

"But because so much CSR appears to be about sustainability issues, FMs are a natural inclusion in most CSR teams," says Black. But CSR leadership often comes from the financial area of an ogranisation, mainly because today CSR is featured in many corporate reports.
What makes FM increasingly central to CSR is that CSR has moved on from being a simple add-on to placate a minority of investors to being a cornerstone of a company's brand image. It won't do anymore to have only pleasant-sounding statements setting out the organisation's fair recruitment policy, she says. FMs help organisations put their money where
their mouths are.

"Companies that plan to be here in five to 10 years use CSR to maintain their brand image. Good CSR is increasingly a tool used by HR departments to retain and attract high-quality staff," says Black, a consultant who has been in FM since 1989 with local authorities and the health service, and who also spent nine years at the charity Save the Children.

In that respect, CSR can be well interwoven with human resources issues, such as disability access, as well as improving recruitment from specific geographical areas, hiring people from certain socio-economic strata and the increasingly common promise when bidding for work to create apprenticeships for local people.

Small businesses, too, can't afford to ignore CSR, but often have fewer people to think through a policy or even know where to begin. "CSR might be given to FMs by default," says Black. "FMs should realise it's a good career development opportunity - a blank slate to draw the CSR tactics and strategy on."

While HR and FM appear to be the natural homes for CSR tactics, the strategy is more often marketing-led these days. The reason is simple - CSR is about image, albeit with substance, but image nonetheless, says Rob Farman, an independent consultant with more than 25 years of experience in FM.

FM and HR have to work hand in hand because of overlapping requirements of a good CSR policy. The physical office is seen as part of the caring attitude a business has towards its employees.

But a business needs to get this positive image out in the marketplace for all to see and that is where marketing steps in as the overseer, says Farman, who is also a lecturer at Reading University's School of Construction and Engineering Management.

External CSR allows for extracurricular activities for an FM. This can range from working with a school to help set up learning gardens for children or organising a work detail for painting or construction on a worthy charity project.

However, the current economic downturn might be putting a curb on some of these external activities if people have to be out of the office, says Farman.

Regardless of who leads a CSR strategy, FMs should - and need - to get involved, says Dave Wilson, a director of Agents4RM (the 'RM' standing for responsible management).
All things being equal, CSR is about one company being better to do business with than the competition because it treats humanity and the planet better.

The trend is for more complex reporting, more collation of operational data to see where the business can improve its CSR performance.

"FMs are uniquely placed to translate the often vague CSR aspirational statements into something measurable; in other words, convert a policy into an outcome," says Wilson, who was a subject matter expert on the Sustainability Facility Professional Credential Programme at the International Facilities Management Association.

Paying a living wage may sound like an HR issue, he says, "but who often employs people at the lower end of the pay scale? FMs do. So we have to measure the effect of paying the London Living Wage."

It was 25 years ago that Wilson first heard about 'food miles', the measurement of how far produce travels from origin to the consumer's plate. That may be an easy linear measurement, but someone has to measure it.

FMs have been measuring ever since, or they have at least relied on their supply chain to do it. CSR extends well down the supply chain whereby what your supplier does in Cambodia affects your image - and therefore sales - in Europe. It's not always easy to see what goes on behind a supplier's closed doors.

Closer to home, catering is no exception. For the best part of a decade, the sector has been getting down to proving its CSR credentials, from local sourcing of produce to having less salt in the food.

"We, as caterers and other contractors can assist, advise and help our FMs because we have specific knowledge," says Simon Macfarlane, operations director with Byte Catering.

"Some, whose client companies have strong CSR policies, are keen to understand more and discuss CSR at regular meetings," says Macfarlane. "Others less so. But we always bring the subject to the table."

Too often, he believes, FMs see CSR as additional cost in today's economic climate. "It can be, but it doesn't have to be," says Macfarlane who has 20 years in the hospitality and catering business. "It's about giving the end customer a choice of paying extra for a meal that is more ethically sourced."

But it's also about having a supplier with CSR embedded in its own processes at no extra cost to a client. Byte Catering has its used cooking oil collected for refinement into bio-diesel that is then used as fuel for its delivery trucks.

Similarly, the company's coffee grounds are given to customers or a charity for use as compost. Otherwise, it would be hauled away as waste, and would then be part of a direct cost within the contract.

It's a win-win situation, says Macfarlane. Both client and supplier tick the CSR box.
The level of CSR reporting is rising as the years go by and engulfing more and more areas. It now encompasses everything from global climate change to the minutia of better chicken coops for the hens that lay the staff canteen's eggs.

FMs won't get away from CSR, says Wilson. Knowledge and experience of it is no longer an add-on to a career, a sub-section of an FM's CV, or a feel-good activity done outside work. It's integral to the FM profession, but also potentially more important.

If you're in the Maldive Islands with an average land height of less than five feet, good CSR is not an option, he says. It's an imperative.


"Despite the economic downturn, we have remained true to our pledge to show the way on corporate responsibility," says group chief executive Peter Marks. Within retail, 70 per cent of developing world products for sale that can be sourced as such are Fairtrade.


The number of schools active in the group's 'green schools revolution', which comprises lessons, teaching resources and activities including farm trips to learn about the environment, will double to 6,000 by 2014.


The group's carbon reduction and energy efficient efforts have been praised by Jonathon Porritt, founder director of Forum for the Future, and a former government advisor on environmental issues.


"Community energy schemes are at last coming into their own. The support promised to community energy by the Co-operative has the potential to transform this hugely exciting sector," says Porritt.