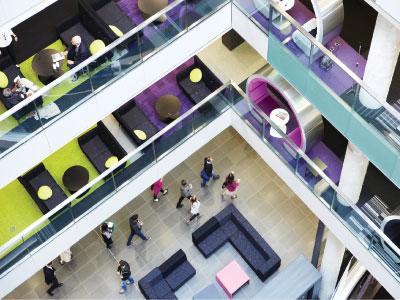 The BBC's much-heralded move to MediaCityUK in Salford involved an experiment to embed FM personnel directly into the teams they support, promoting the integration of FM with the client's operations. Martin Read finds out how it works.

The tram trip from Manchester Piccadilly station to the MediaCityUK development in Salford is a must for any enthusiastic follower of architectural history.


The line oscillates wildly between canals, a slew of abandoned industrial sites and plenty of recently re-let industrial buildings before arriving at the BBC's new northern home.

Over 20 departments, including BBC Radio 5 Live, BBC Breakfast, BBC Sport, BBC Children as well as the BBC's North West Local and Regional programming teams are based here. When you arrive, the sleek buildings of the BBC North operation are a key part of the development.

The 'activity-driven' design of the workspaces in the three buildings was based on an analysis of how people worked and a consideration of the new technology they could expect to be deployed, as well as an elimination of physical hierarchies. Nobody has an office at Salford, and nobody owns any of the facilities - everything in the buildings is shared.

Alan Bainbridge is the BBC's property director. Nearly five years ago, he joined the BBC specifically to lead the Media City move project, although his remit was soon extended to cover facilities and property management for all the BBC's portfolio that is situated outside the M25.

"This is not simply a new headquarters for the BBC," says Bainbridge. "We were held back at Oxford Road by the facilities there and our ambitions for MediaCityUK were for greater accessibility, openness, efficiency and value for money. We knew the new building would have to offer a lot to those who used it.

"Having fine-tuned the working environment, how we supported it had to be planned with the same level of design and skill," continues Bainbridge. "We didn't ask for any more service-delivery lines on the contract, but we did go through each line to establish whether it matched the vision we had about how this place was going to operate. We designed a workplace that could grow and move with us. It had to have enough flexibility in it so that as and when new technologies came along, the buildings could move with us."

The FM model at Media City comprises two aspects - a standard model of service delivery (including critical maintenance) and a new element known as 'workplace support'. Of the 110 Balfour Beatty FM staff on the contract, 13 are these workplace support team members. The definition of workplace support devised by the BBC and Balfour Beatty Workplace is of a new kind of interface between the client's customers (the various teams of BBC employees) and employees of the facilities provider.

Individual members of the FM team are 'embedded' within individual BBC departments, in this way learning the working habits of the team and the ebb and flow of their facilities requirements. Effectively, these workplace support staff get in a position to 'second guess' the requirements of BBC colleagues.

"We've put people in with the BBC's departments so that they get to feel a part of the team and understand the people that work in them," says Pete Mathieson, contract director at Balfour Beatty Workplace.

He gives the example of the BBC Radio 5 live team. "Our embedded workplace support team member needs to know that at midday on Wednesdays, the 5 Live team will be heading over to the House of Commons for Questions to the Prime Minister and that during that time absolutely nothing can disturb them. They have to know that, have to prepare for that and need to work around it."

This is not 'embedding' in the same way media personnel can be 'embedded' with military units; it involves interaction with the BBC's teams as and when required, often for all hours of the working day. In this way, there is no immediately obvious distinction - to the outsider, at least - between the BBC's own staff and the Balfour Beatty team member providing the service.

"We brought them in from industry, not FM," says Mathieson, referring to the workplace support personnel. "They came from hospitality roles in airlines, hotels, even Manchester United Football Club. They were employed for their people skills, not their FM skills. We've trained the FM skills into them, but it would have been harder to train the people skills into them."

Each member of the initial group of workplace support personnel participated in the decision to select the team for which they would work. This led, for example, to the future media and technology team (situated in Dock House) having a workplace support member who, says Mathieson, is "actually quite similar to his customers. The way that particular BBC team communicates with him is predominantly through email and as a result it generates twice as much email traffic compared to all other departments, but he's comfortable with that."

The point is for the individual to fit in with the character of the team, although each also has a working knowledge of three or four other departments so that they can overlap or deputise when needed. They also break away from their BBC groups on a daily basis to meet as a team, discussing any issues arising in their own groups and deciding where any problem hot spots can be dealt with.

With the workplace support staff brought in from non-FM backgrounds, how have they coped with the day-to-day M&E demands of their BBC clients? "We've worked alongside the BBC so that our workplace support have got the top-10 fixes for general IT issues such as video conferencing, telephony," says Mathieson.

"But when the nature of the problem goes beyond that top 10, we can start drilling down
into the BBC technical support teams quite quickly.

"90 per cent of all reported faults in this building come through our helpdesk from our own workplace support staff. One of my objectives was that I didn't want BBC staff having to ring
the helpdesk because then you as the call receiver doesn't get a genuine appreciation of the priority level.

Workplace support makes the call. It has an ability to pull an FM team on to it in seconds if necessary. They are delegated to that responsibility."

That delegation is a critical distinction. Empowered to run their own show, workplace support team members pool resources to overcome most issues, pulling people on to engineering, cleaning or porterage issues as they emerge, 'swamping' the problem before stepping back, job done, into their regular roles. Making the critical calls, says Mathieson, is easier when that call is made with the benefit of direct experience of its importance.

"Because they know their departments, they know when a broken light bulb is critical and when it's not. If another staff member rang the helpdesk, they might go through a standard prepared text to establish the bulb's importance and the priority its replacement should be given. But if you're embedded in the team, you know to cut to the chase - it's the bulb over the presenters desk, he's live on air, and he can't read his script."

One interesting effect is that the role of workplace support has become aspirational for many of the front-line workers on the FM contract, adding an extra level of responsibility for others on the contract to work towards.

It's this mix of an informed decision-making process coupled with an awareness of meeting the standard service delivery KPIs that makes the workplace support team special. In terms of reporting, Mathieson's touch is relatively light, but his team knows that despite their relative freedom to act, minimum standards remain just that. "The standard requirement on the contract hasn't changed; it's still about the cleaning, engineering, porterage and security.

We've improved the way the person on the shop floor who is responsible for the provision of those services, interacts with the customer - that is the difference.

Bainbridge explains the importance of this approach.

"The corporate brand is the BBC brand, but within that we have BBC Radio 5 live, local radio, national and local TV, BBC Radio 3, and so on - each is very distinctive in the way they create their output. We're dealing with 37 different groups and while each has the same requirements for much of what they do, each needs to be serviced uniquely."

Bainbridge appreciates that much of what is being discussed here is 'soft' in language - as much about the relationships and empathy skills of FM staff as it is the more typical elements of time and project management. But for him, the way the FM service keeps MediaCityUK going is a big step forward.

"In property and FM, I think the problem is that there's not enough passion about buildings by those managing their day-to-day operations. If we're not proud of this building, then the people who use it aren't going to be either.

"The FM market has traditionally delivered something very engineering-centred," he continues. "but we're more like a bank or laboratory, that is, an operation that has to be going no matter what. Because so much of our programming input is through people, keeping them going via FM is critical.

"My view is that the operation we have here is about three years ahead of anything else
I've seen."