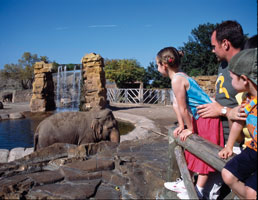 Two years into its energy management project, Chester Zoo has seen consumption tumble in its most electricity-hungry exhibits, freeing up funds for its vital conservation work

It took a period of gentle persuasion for Ray Morrison to convince the Chester Zoo hierarchy to part with the cash that would bring his energy management ideas to fruition. But the case made by Morrison, the maintenance manager, convinced those holding the purse-strings that the plans could bring benefits to the zoo’s finances and its carbon footprint. By investing in technology that would save on consumption in the plant serving the most energy hungry exhibits, the project would soon pay for itself.

More importantly, the improvements would mean vast reductions in bills. By eventually showing faith in Morrison, who’s been working at the zoo for almost 20 years, the decision makers didn’t have to wait long before seeing how the energy plans would reap rewards.


It was two years ago that Morrison conducted a sight-wide evaluation to identify the levels of energy consumption across the various exhibits and facilities. It had been sparked by the zoo’s work toward ISO 14001 conformance, but whereas the standard’s requirement relate to improvements, Morrison’s saw the opportunity to meet higher targets.

“14001 only calls for continuous improvement so we took that many steps forward through a holistic and detailed approach to energy management.”


He and his team identified a hierarchy of energy use on the site: “We started to refer to the various parts in terms of Premiership, First Division and Minor League, and that’s stuck. The Premiership being the top ten energy users.”


Once the football analogy was set, the team went for some quick wins – introducing low energy bulbs, replacing boilers. But the key strategy was demand matching. This was done by applying optimisation across a whole range of buildings, in terms of heating, cooling, lighting, ventilation. It was achieved by using variable speed drives introduced to plant at three exhibits: elephants, penguins and jaguars.

Following the herd
The elephant exhibit, which houses a herd of eight Indian elephants, has seen the greatest success. Outside air temperature sensors installed to the BMS has enabled summer and winter settings based on the ambient air: “At some stages we don’t need to heat or cool,” says Morrison.


Previously temperatures had been set at a constant 21 degrees but closer controls meant that a cooler temperature during the night could be achieved. Overall, energy consumption associated with heating and cooling the building has dropped by 82 per cent.


At the penguin pool, the main culprit for consumption was the water plant. Three drives were installed (two working, one on standby at any one time) to control circulation through the pool area. A system adding ozone to the water (to kill bacteria) added to the power burden. The demand matching provided by the variable speed drives made themselves useful by permitting a reduction in water flow of 70 per cent at night. The average savings in consumption was 40 per cent.


The jaguars now enjoy similar benefits of the ventilation, heating and cooling controls to the elephants, thanks to two drives. The exhibit is kept at a sub-tropical environment for the benefit of the big cats and the flora that’s housed there. CO2 levels are monitored so that should the system be off it will be enabled automatically if an increase warrants it.


The zoo equates the energy saving achievements at the elephant and penguin alone to £38,000 and 130,000 kg of carbon emissions during 2009. Such figures, particularly in finance, means a great deal to a charitable organisation such as Chester Zoo. As Morrison puts it: “Every £1 saved is £1 that can be reinvested in animal welfare and conservation projects worldwide.”
Another innovation has been to link ventilation systems to air quality monitoring. So previously the original mechanical specifications for the building would have led to staged air changes as the public were present, Morrison’s team has now linked air quality monitoring: “If there is no need to change air then we reduce the mechanical ventilation and rely upon advantageous air or passive systems. We found that we can slow the mechanical ventilation, or place it on standby. That’s saved 30-40 per cent of electricity consumption in some buildings.

Pleasing outcome
With the projected returns soon exceeded, Morrison was pleased that the case he had made was quickly borne out by experience. “There are good computer models which you can use to demonstrate potential savings and I was able to present tables and graphs to make the case.”
When the first project was funded – the elephant exhibit – the rewards were so tangible in a short space of time that the other proposals for the penguins, komodo dragons and jaguars quickly gained approval. With work tackling the ‘Premiership’ exhibits under their belts, Morrison’s team will move on to the ‘First Division’ challenges: “It won’t take the same level of investment, we’ll look at lighting, boilers – work in the region of £5,000 rather than £20,000.”

One area to examine is voltage management. Case studies Morrison has seen suggest there are whole-site gains to be had from voltage management. There’s also the prospect of a biodome to maintain. Last year, the zoo announced ambitious plans to develop a £225m domed attraction housing an African rainforest-themed sanctuary for a wide variety of creatures, great and small.


Morrison is proud that the team and the wider group has gone beyond providing continuous improvement and delivered excellence in energy management, efficiency and control: “At Chester, it’s been a good collaboration between a good in-house team with intimate knowledge of the systems, me as a facilitator securing the funding and working with contractors such as JCB Controls and Danfoss. We weren’t just here for ‘when it’s broke we’ll fix it’ – we were proactive.”


“A lot of my time on site is dealing with statutory compliance but this extends our value. Sustainable development has got to be one of the pillars of FM.”
Such thoughts and deeds exhibited by the team at Chester Zoo will continue to see the attraction rightfully held up as an enthusiastic exemplar of sustainable practice.

Chester Zoo’s Tropical Realm exhibit provided a different type of challenge for Ray Morrison and his maintenance team: “The system was such that no quick fix option was open to us but we are fitting high efficiency warm air heating plant.” To source the equipment Morrison used the Energy Technology List, an online resource managed by the Carbon Trust as part of the Enhanced Capital Allowances scheme. For a product to appear on the list, and therefore qualify for an ECA claim, it must have satisfied the schemes stringent criteria on energy.
More details can be found at www.eca.gov.uk/etl

•  The zoo has reduced its carbon footprint by approximately 200 tonnes