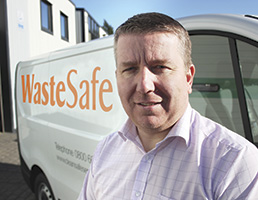 Most businesses would like to be able to put all waste into a wheelie bin and forget about it. But there are scenarios when that just can't safely and legally happen, says Martin Bull


Thousands of businesses across the country have been badly affected by flooding caused by extreme weather in December and January. As a consequence, many will find how much harder it is to make the right decisions on waste disposal in line with legal requirements and sustainable business principles in extreme circumstances.


Having extra knowledge about the potential hazards, technical challenges, and legal issues of even relatively normal situations such as fly-tipping, food waste handling and badly blocked toilets is becoming much more important.

Managing flood waste is inextricably linked to the recovery process. When a flood hits, facilities managers face a complex set of priorities. Relocating staff affected and business continuity will be the major concerns.

What can be overlooked is the ticking time bomb caused by floodwater. It is imperative to clear floodwater as quickly as possible; long-term recovery will be faster the quicker the water is removed, and the earlier the drying process will start.

Floodwater is often quickly contaminated with sewage and oil, but the longer it is left, the more likely it will have to be treated as polluted and be disposed of at an authorised site. Failing to start the flood and waste clearance in a timely way can add significantly to costs and delays in full business recovery. Despite this, some businesses treat sourcing a flood recovery specialist as a standard tendering process - not understanding the urgency of the situation.

Seeking to save a bit of money now could cost unwary businesses a lot more in future.

Raw sewage is potentially deadly. It contains a wide range of viruses, bacteria and parasites. It is surprising how often businesses face dealing with it. Whether it is a leisure centre with 100 tonnes of sewage under its swimming pool, or a developer who wants to clear a site where a foul drain has been left uncapped, extreme sewage contamination is more common than most businesses plan for when assessing critical risks.

Cleaning a toilet is not the same as dealing with a sewage spill - even a small one. The level of protection needed is much higher. Having the right personal protective equipment (PPE) - full body suits, masks, and sealable gloves and footwear - is essential.

Sewage often settles in low-lying confined areas, such as cellars or even voids under suspended floors, creating risks from toxic gases such as hydrogen sulphide. FM managers and businesses have a duty of care to their cleaning teams, as defined by the Health and Safety at Work Act (1974). In-house cleaners and waste teams cannot be sent into environments where their safety is put at risk.

An investigation by the Parliamentary Communities and Local Government Committee found that reported incidents of fly-tipping increased by 24 per cent in 2015. Its findings prompted a government report on action needed.*

Where fly-tipping happens the temptation might be to send in a regular waste clearance team and put the waste in regular bins. But such waste can often conceal serious hazards. There have been incidences of asbestos being deliberately buried at the centre of a mound of fly-tipped waste. Fly-tipping sites often contain human faeces and urine. Where there are signs of temporary habitation, there is often drug paraphernalia, including needles. Without the right risk assessment procedures and equipment - needle boxes, Kevlar gloves and trousers, and litter pickers - disposing of this waste becomes a hazard to health.

Local authorities and waste management companies are increasingly trying to stop food being put into general waste. A lot of UK waste is now exported for use as remedial derived fuel in industrial processes. Food is too wet for this material. It is also heavier than general waste, so can incur extra waste collection costs and penalties.

Food waste collected by specialist waste collection companies can go for anaerobic digestion, which keeps down disposal costs for clients. In Scotland, from January 1, businesses that generate more than 5 kg of waste a week are required to arrange separate collection.**

Putting food in general waste is a key cause of vermin infestation because standard bins are not designed to deter rats, mice and birds. Yet it is surprising that so many businesses still do not treat food as specialist waste, or do not realise the additional costs they are incurring by not doing so.

Old habits of treating waste management as a low-value, low-priority task persist. Risks associated with emergency situations are often not fully understood. The only real answer is to seek specialist advice and support. Emergency and extreme waste management should be a key part of an FM team's waste strategy. It is also essential for businesses to understand that extreme waste scenarios are now increasingly common because of tighter regulations and changing patterns of waste creation.