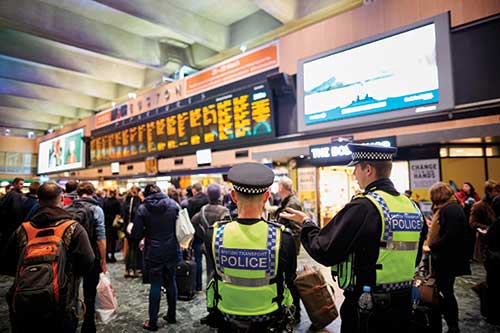 Facilities personnel, with their understanding of the assets they are responsible for and the users they serve, are uniquely positioned to help organisations to be vigilant against the threat of terrorism. As the counter-terrorism scheme Project Griffin is being extended, Terry Hanley, director of security at Interserve, looks at the role FM can play in keeping Britain, its people and its businesses safe.

What is Project Griffin?

Project Griffin was developed by the City of London Police, and introduced in central London in 2014 as a joint venture between the City and Metropolitan Police forces. It has since been adopted by police forces across the UK and overseas. Its aim is to advise and familiarise managers, security officers and employees of public and private sector organisations on counter-terrorism issues, through raising awareness.

So what does this mean for FM and security providers

Facilities management teams are often the ones walking the floors of our nation's biggest and busiest buildings and public spaces.FM professionals have a unique overview and understanding of the assets they manage and come into direct regular contact with members of the public and other stakeholder groups. Part of their day-to-day role is to identify anything out of the ordinary and troubleshoot problems as they arise; it is not a significant leap for these teams to remain vigilant for potential security issues as well.

What does Project Griffin involve?

The police are looking to partner with major organisations, especially those with large public-facing workforces, to provide employees with the training they need to be able to identify possible terror threats. This is normally delivered in the form of a half-day awareness session that educates employees about the reality of counter-terrorism, key warning signs to look out for, and the protocols to follow when sharing information with law enforcement agencies if and when a threat is identified.

At Interserve, we have been strong advocates of the Project Griffin programme for some time. Most recently, in our transport division we have been working with the British Transport Police to provide terror-related security training to our cleaning teams. Meanwhile, in the retail space we now have operatives who are being trained not just to identify potential threats, but to actively support security teams and police in the case of an attack.

Does it cost anything to take part?

To date, the training itself has often been provided by the police so there hasn't been a direct cost associated with Project Griffin, but there is the soft cost of employees taking time out of their day-to-day roles to be considered. We have sought to streamline this process by bringing Project Griffin training in-house, supported by guidance provided by the National Counter Terrorism Security Office (NaCTSO) Product Familiarisation programme. You need to be registered as a partner with NaCTSO to do so, but being able to self-deliver the training enables you to form closer working relationships with policing partners across the UK - and realise significant cost efficiencies by integrating the training into ongoing skills development programmes.

Much also depends on how FM providers are structured. The process of cross-skilling frontline operatives works best when non-security personnel directly collaborate with the provider's own security teams, as well as with the police.

At a time when the FM industry is striving to push itself up the value chain in the eyes of its customers and the public, this is an opportunity to achieve just that while making our country a safer place to live and work.

Terry Hanley is director of security at Interserve