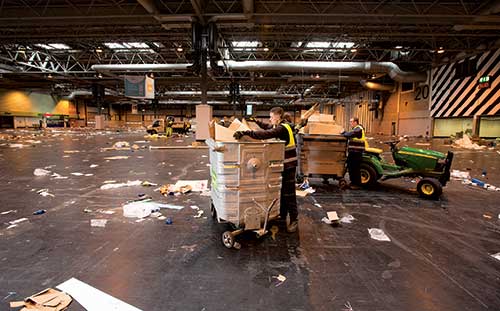 This is where we highlight specific technological solutions to typical facilities management problems. Email explanations you'd like to see to [email protected]

An exhibition centre of the scale of the NEC, spanning 182,000 square metres of indoor space, is home to 140 conferences and exhibitions each year. As such, the centre produces large amounts of cardboard waste, as well as discarded brochures. Lorry-loads of cardboard and other waste were being sent off for further processing.

To make the process more efficient a waste pre-treatment centre was opened on site to give team NEC the ability to sort materials into its various streams, before material is baled and sent for further processing. The centre helps to both pre-sort and package waste materials, as well as cut down on transportation costs to processing sites, such as the nearby anaerobic digestion centre.

"We would send a tonne of cardboard in the skip and stamp it down," explained Steve Cartmell, the man in charge of cleaning and waste contracts at the NEC.

"We came up with the idea for an on-site waste pre-treatment centre on a Post-it note over a bacon sandwich. I still have that Post-it note."

The pre-treatment centre is in place to collect all waste from exhibitions, separate and bundle the materials to be transported to anaerobic digestion plants, where the energy generated from the waste powers a sewage treatment works.

2 - How do you implement this?

First, the whole organisation must be aware of your new strategy and the reasons behind it. The waste and recycling management teams meet with each exhibition organiser every year to identify where and how they can prevent, reduce, reuse, recycle or recover waste. The NEC has capped the waste organisers can leave behind, and it has frozen its waste management fees for the past three years.

3 - What was the immediate impact?

When the pre-treatment centre opened, combined with further waste processing partnerships, the site transformed from nearly 100 per cent of waste going to landfill, to zero to landfill, overnight.

"For the first few weeks, I was working in the centre," explains Cartmell. The material is separated, and each stream has a different onward journey. Spare wooden pallets are sold on or given away to local causes, while bins have been placed by loading bays purely for waste paint.

The NEC employs as many as 12 people to work at the centre at any one time. A baler in the centre has helped increase a single truck-load of cardboard from one tonne to 22 compacted tonnes, which is then taken out to further processing plants. The waste trucks are based on site, in order to further reduce the organisation's carbon footprint by reducing the number of empty loads.

By centralising the sorting system, the NEC has been able to achieve more than £700,000 in landfill tax savings so far. It has diverted more than 10,000 tonnes from landfill so far, and the number continues to rise.

5 - What else can be considered?

The team at the NEC is considering anaerobic digestions on site to cut down the transportation costs even further.  Food waste is collected from kitchens, retail outlets and exhibitions, and sent to a local anaerobic digestion plant, just three miles away, where the energy generated from the waste powers a sewage treatment works.


The previous plant that the NEC used was in Staffordshire, but once word of a new plant in construction reached the NEC, no time was wasted in setting up a partnership. The reduction in travel from 27 miles to three further cut the centre's carbon footprint.