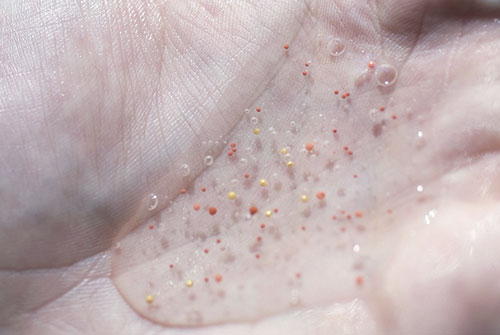 This is where we highlight specific technological solutions to typical facilities management problems. Email explanations you'd like to see to
[email protected]

Too small to be filtered by waste water plants, microbeads have a serious, detrimental impact on the flora and fauna of our oceans. Peter Crossen of NCH Europe looks at what industry can do to combat the problem

Microbeads are commonly made of polyethylene, but can also be polypropylene, polythylene terephtalate, polymethyl methactrylate or even nylon. Toxic chemicals, including flame-retardants, are added to the beads during manufacturing, which leach out into the water supply when exposed to sunlight.

Where are microbeads found?
Microbeads are used in a range of products, from toothpaste to face wash and industrial hand washes. For some time they have been touted as the ideal exfoliant without much thought about where they go after you've washed them down the drain.

Plant engineers, mechanics and construction workers reach for the plastic-heavy hand-wash before clocking out every day to remove the build-up of grease and grime on their hands. In many cases, such environments specifically demand products with a higher concentration of microbeads, believing it necessary for efficient cleaning.

Why is this an environmental issue?
Most microbeads are smaller than 5mm, with those used in many cosmetics products being just 1mm in diameter. So, it's hardly surprising that waste water filters can't catch them before water is returned to the ocean, and more than 100,000 beads can be washed away in a single application of exfoliating hand wash.

Research by Deltares has shown that when plastics break down they release other toxic substances that are harmful to people and can cause health problems such as hormonal imbalances or neurological diseases.

Marine wildlife cannot differentiate between what is an actual food source and what is a microbead, these menaces end up in the stomachs of fish, seabirds, and whales - even plankton absorb them.

Beat the microbead initiative
Greenpeace is calling for a blanket legal ban after it found that corporations signed up to the voluntary pledge had been using loopholes to get around the microbead phase-out. It is also running a campaign to get the UK to join America and Canada in their ban on plastic microbeads.

How plastic microbeads end up in our food:

2. Down the drain
Each time you use these products the particles flow down the drain into the sewer system

3. Into the ocean
Waste water treatment plants can't filter microbeads, so they end up in our oceans

4. Absorbed by fish
Fish absorb or eat the microbeads and they are passed through the food chain

5. Into our food
Humans are at the top of this food chain. So we are probably eating some of these microbeads as well