The benefits of renewable energy storage 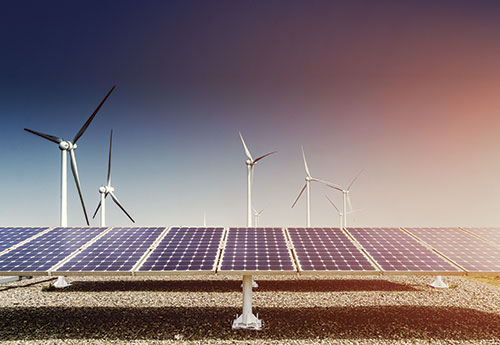 Over the past five years a vast number of home, business and building owners have become aware of the benefits of renewable technology.

As a result, they have made significant investments in it in an attempt to reduce their energy bills and their emissions. But the one drawback of this technology is that it is very much weather and climate-dependent.

Wind turbines do not function well in times of high pressure in winter, and solar panels are not particularly effective at night, which has meant that previous excess energy generated by these technologies has simply been sold back to the National Grid.

But a solution to this process has been developed commercially in the form of energy storage, which allows any excess energy generated by a renewable system to be stored and used at another time. Its emergence is likely to be the next big thing to hit the renewable energy market.

The reason it is so effective is that it enables the end user to make the most of the renewable system's productivity peaks. At present, we have above 8GW of wind power installed in this country, but we produce anything from 500MW worth of energy to more than 7GB depending on the weather. Obviously this wide variation in productivity is unhelpful as a means of power provision, but this could change as we should now be able to take advantage of peak production and use any excess energy at a time when the renewable systems that generate it are not so prolific.

One place where this has already happened and which illustrates both the benefits of energy storage and renewable systems is the London Borough of Hounslow. The borough's senior staff made an investment of £2 million in a 1.73MW capacity solar PV system and four 60kWh lithium ion batteries from a German provider. The system is now set to provide the site of the Western International Market (WIM) with nearly half its 3.5MWh yearly energy requirements. It will also save the borough an estimated £148,000 annually while providing an additional £107,000 from generation and export tariffs each year, so its investment should be recouped within eight years  instead of the standard 10-plus. National Grid and the network operators are also experimenting with battery technology, and a large storage system has been installed at Willenhall in the West Midlands.

But the payback times for these systems will be even shorter if  businesses made the initial investment. The energy and climate change parliamentary committee has urged the government to incentivise the use of energy storage to bring about savings of £7 billion a year to consumers.

It is to be hoped that the new Department for Business, Energy and Industrial Strategy will explore options for this, especially giving consideration to its mandated emissions targets. And, if the Paris Climate Change Agreement is signed and we commit to reducing energy expenditure, we'll need to find new ways to reduce the emissions from the UK's commercial buildings.

Energy storage is vital if we want to harness the full potential of renewables and cut energy bills and emissions. As clients become ever more aware of the range of benefits on offer, including to their business, their buildings and the environment, take-up of this technology will rise.