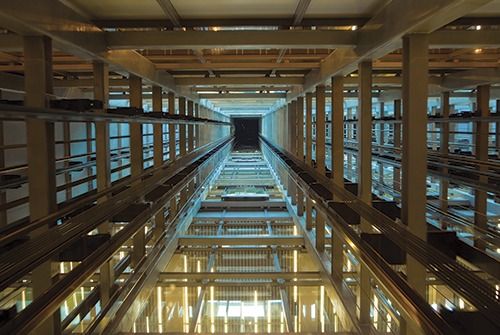 A passenger lift is essentially a small, metal box with limited airflow, suspended many metres in the air by nothing more than a hoist. When you think of it like that, it is hardly surprising that so many of us harbour phobias of lifts.

One of the most pressing threats is from electrical faults.

In my experience of supplying lift control systems to businesses worldwide, two of the worst instances of electrical faults were at a Leeds shopping centre and a big manufacturing company in Germany. These two incidents highlight the typical electromagnetic compatibility (EMC) issues that electrical contractors must tackle on lift-related projects.

The shopping centre used a four-car variable frequency (VF) motor-drive group of elevators that had been working normally for three years, before then blowing a £3,000 central traffic-dispatching computer. After spending three days on site, I found 180 earth faults - which was a shock as this installation had been checked for earth loop impedance by a reputable engineering company and passed with flying colours.

After another £3,000 worth of kit failed, I went back and found the five-inch mains riser was terminated to a new distribution panel being installed while I was on site. The riser went into a gland plate that sat on a cork gasket, nylon insulation washers and powder-coated metalwork. There was no earth conductor at all.

There are two problems with this. The first is that if we suffered a secondary fault, such as a door lock short to earth, then the elevator could run with the doors open. Secondly, the DC bus rises to 600V on each VF drive and could have proved fatal to the users pushing buttons outside the lift.

The second interesting site was one for a big manufacturing company in Germany.

A factory the size of a car plant with automated trains and conveyors would dump its programmable logic controller (PLC) software on a weekly basis. The company spent a fortune sending engineers out to re-programme these huge machines for six months.

The problem was that the main control system was fed from a supply on the other end of the factory that already had an earth conductor and they didn't want the expense of installing a second one. Unfortunately, this earth conductor turned out to be the roof lightning conductor so the only option was for the German electrical contractors to dig up floors.

Since these incidents I've been doing EMC training for customers. All these training days bring out the same stories.

For example, a tachometer fault will be the result of poor bonding of the trunking runs and pigtails on the screen for the tachometer.

From my experience, the two biggest problems are pigtails on the hoist motor terminals combined with poor bonding of the trunking runs.

Pigtailing cable screens has been frowned upon by EMC experts and IEC 61000-5-2 for years but, nevertheless, electrical contractors still do it. How long will it take to retrain them so that fixed installations in Europe stand any chance of complying with 2004/108/EC regulations?