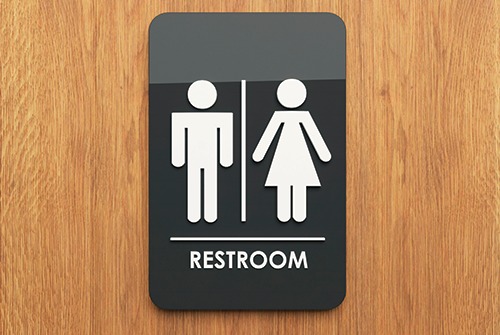 Unisex bathrooms have been making headlines on both sides of the Atlantic. Although they have often faced opposition, they are likely to become more common. So what are the implications from an FM perspective?

Why install a unisex bathroom?

The main argument in favour of gender-neutral toilets is that they can reduce waiting times for the ladies' room. Queues form because women generally take a longer time to use the bathroom (time-saving urinals aren't an option) and need to do so more frequently than men (because they menstruate and tend to have smaller bladders) - and yet men's and women's bathrooms have always tended to be the same size. Installing washrooms that accommodate users of both genders can help bring about what's come to be known as 'line equality'.

Unisex bathrooms are also an issue in the trans community. Deciding which bathroom to use can be a daily source of distress for non-binary people, who can often face discrimination and verbal or even physical assault for using what others perceive to be the 'wrong' bathroom. Unisex bathrooms can also make life easier for parents who need to accompany a young child of the opposite gender to the bathroom.

There are clear cost benefits to installing a unisex bathroom. By combining facilities, you'll free up space that can be used for more profitable purposes, and you'll also have fewer overall facilities to maintain and clean. Unisex toilets also do away with the issue of male cleaners entering female bathrooms, and vice versa.

There are also 'soft benefits' to gender-neutral toilets. Enhancing user experience can bolster your brand and bring in more repeat custom and position you as an inclusive organisation, which makes for excellent PR and branding.

There are compelling moral arguments on both sides of the debate - but what does the law say? Not much, although there are rules that can make doing so trickier than you might assume. The main provision, set out in the Workplace (Health, Safety and Welfare) Regulations 1992, is that gender-neutral toilets must be in a separate room (rather than a cubicle) with a door that locks from the inside. The cost implications of installing each toilet in its own room instead of in a cubicle means that savings from combining bathrooms could be quickly negated.

Schools were among the first to adopt unisex facilities. In fact, the now-defunct Department for Education & Skills actively encouraged unisex bathrooms. Its 'Toilets in Schools Guidance' claimed that they can help cut bullying and vandalism. The DfES's replacement, the Department for Education, states that although current regulations do not allow for unisex toilets, they should be revised. Otherwise, existing legislation doesn't make much provision for unisex loos, so if you decide to take the plunge see, for example, the following information from the Health & Safety Executive, and the Building Regulations Part M.

A unisex bathroom that accommodates users of all genders will need to be larger than a single-sex bathroom. The fact that each stall must constitute a separate room also means you will have to factor in additional space. One of these will need to be enlarged and reserved for disabled users.

Because each toilet room will potentially used by women, each one should contain a bin for sanitary waste, and you may also wish to provide baby-changing units depending on the nature of your facility.

Installing urinals will help cut waiting times. To help preserve the modesty of your users, urinals can be installed behind a partition wall, screening them from view.

One of the key criticisms of combined toilet facilities is that they could lead to a rise in sexual assaults. While this isn't likely, you may choose to assign security staff to the vicinity to put users' minds at ease.