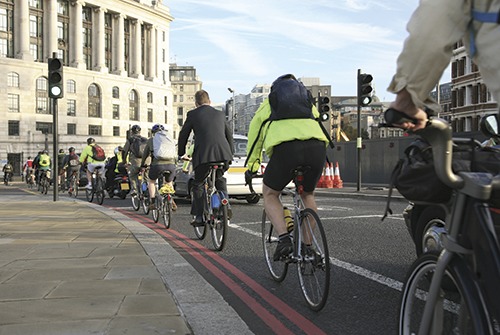 Cycling is either the new golf or the new Marmite. If you live and work in a city such as London, then you might have an opinion about it. But get used to it; the trend for cycling to work is growing and it's not going to stop.

A British Council of Offices (BCO) report into cycling, 'The Market Cycles', combines two surveys, one carried out by YouGov and the other by Remit Consulting.

The former, which focuses on understanding the role of cycling as a daily commute, reveals that about 11 per cent of the UK are cycling office workers.

In London, the number of people cycling to work increased from 77,000 in 2001 to 155,000 in 2011, according to the Census from that year. The government is backing bicycles and is looking to double the number of cycle journeys before 2025.

Cities such as Manchester, Nottingham and Edinburgh aim to increase the number of cycling trips by at least 10-15 per cent, which means that sorting out how and where these bicycles will be stored and parked from 9-5 will be a task for FM service providers.

There are some commercial developments and offices that have already incorporated cycling infrastructure as a major factor in their design and management. Many of the big schemes on plan, or those that have recently gone live, do not prioritise car parking.

The Cheesegrater, 52 Lime Street (the Scalpel) and 100 Bishopsgate, all of which are in London, are good examples of this shift in focus. Occupiers of these buildings have specified well-designed, functional and secure cycling facilities.

This goes beyond bike racks. We are talking showers, changing facilities and a drying room - better known nowadays as end-of-route (to work) facilities.

The Verde building in Bressenden Place in Victoria, also in London, does this well. Tishman Speyer, the owner developer, anticipates that by spring, it will have 3,000 end users across 300,000 square feet, providing 440 bicycle spaces.

"Demand for good-quality cycling facilities has evolved hugely in the past 10 years as cycling has become increasingly popular," says property manager Nick Adams. "At Verde, there is a dedicated cycling entrance right off the street via a ramp to 400 bike parking spaces, 33 showers and 400 lockers."

The prediction at Verde is that 13 per cent of its working population will cycle to work. If this increases, more space will be created.

Central St Giles in London has also seen growth. It began with 3,500 permanent employees, 1,500 visitors and 200 cycle spaces. Demand has pushed that to 450 spaces.

The degree of importance given to cycling facilities will depend on the location of the building, says Chris Moriarty, managing director, UK & Ireland, at Leesman. Cities such as Amsterdam or London, where cycling is already well established, will need to

So what has triggered demand? Is it a company policy on sustainability and reducing its carbon footprint? Or is it about well-being?

Government data, figures from Transport for London and the BCO report indicate that the number of those cycling to work will continue to rise, however, there is a lack of workplace or FM data linked to that perceived demand.

While not specifically asking the question about cycling to work, the Leesman Index says 59 per cent of respondents on its database feel parking for cars, motorcycles or bicycles is important, but only half of them are satisfied with what has been provided.

When it comes to leisure facilities on site or nearby, 48.4 per cent regard this as important, with 33 per cent feeling the same way about showers, although only 34.7 per cent are satisfied with what they have got.

It's not just about acknowledging that people are cycling to work. Ian Ellison, director at 3edges, says the important point to determine is what is motivating people to do so.

For employers, it is about having healthy people arrive at work and being ready to roll. Citing figures from Cyclescheme, one of the UK's cycle-to-work schemes, FM and sustainability consultant and avid cyclist Martin Brown says 89 per cent of employers regard cyclists as being more energised than their commuting colleagues. He says one of the pleasures of cycling to meetings, even in wind and rain, is the time to plan and prepare for the day ahead with a free mind.

But cycling to work is not just about the health benefits to cyclists. It is also about taking action to clean our air.

The UK has repeatedly broken legal limits of nitrogen dioxide, mainly from diesel vehicles, in the past few years. Many towns and cities are failing World Health Organisation guidelines for particulate matter, nearly half of which is produced by tyre and brake wear, a problem that will persist even with electric vehicles.

More than 13,000 premature deaths owing to air pollution can be prevented over 10 years if England and Scotland reach their respective official targets to get more people to walk and cycle.

This is one of the research findings from charity Sustrans and environmental consultancy Eunomia. The study estimates that the economy would receive £9.31 billion worth of benefits during the same period, including reduced costs associated with NHS treatment of respiratory diseases.

Developing a network of protected cycle routes on roads and providing quieter routes across the UK are the best ways to improve air quality, says the study.

Cycling is good for us all. The air we breathe will be better with fewer cars on the road, and cyclists tend to be healthier and more energised employees. But how do we find the physical space at facilities to accommodate this changing behaviour?

One government building that already had showers and locker space in a basement adjacent to a gym simply expanded it to accommodate increased demand from cyclists and runners.

There were no issues with power or water supply, but there was consultation with staff about reducing car parking spaces to increase cycle spaces. For older buildings where facilities need to be retrofitted, a review of what's needed to match the behaviours of the workplace users is critical.

"The first step must be find out what is happening in the building," says Justin Sires, founder of PFL Spaces. "What is the user experience? Are all available facilities being used to the max?"

Sires points out that the behaviour surrounding cycling needs to be addressed. Not all cyclists are middle-aged men in Lycra. There are those who might prefer bringing a Brompton (folding bike) into the office or others that ride a 'sit-up-and-beg' Dutch-style bicycle frame.

"It is important to create a balanced amenity that works for everyone and meets the demands of different people's journeys," says Sires. "But you need to ask difficult questions to arrive at the right specification."

Functionality is important, so bike racks should be evenly spaced and easy to use while lockers should be nearby and provide sufficient hanging space to store users' clothes. Perhaps digital access or a card that communicates with a building management system will further simplify use.

Sky's campus site in Osterley provides users with three bike racks, one of which is 300 metres and has capacity for 700 bikes, as well as 800 lockers, 90 showers and drying rooms for wet cycling gear. There is also a cycle shop offering free servicing and a reduced price on parts and bikes.

Sky may be exceptional - after all, it does sponsor the professional race team led by Chris Froome - but it is catering

"There is around one rack per nine campus staff, but this goes further than just showers, secure bike storage and lockers," says Dan Dunford of Sky's FM provider Mitie. "It is a cultural thing. Sky sees cycling as part of its character. Cycling is all about a flexible, active, healthy way of working and we help make it tick."

The end of the route

Setting up end-of-route facilities is a perfect example of where FMs can add value. Who else knows about the building dynamics? Who else can provide a holistic perspective that covers the entire building from the ground up, including communal areas and the car park? What is the demographic of the site or building?

Getting it right the first time is important to save on costs. Installing showers, for example, is not only expensive but difficult to deliver.

If implementation is done properly, cycling facilities will make a building and, therefore, the employer more attractive to employees. Employers and owner-occupiers of buildings no longer see provision of cycling facilities as a nod to social responsibility. It is increasingly becoming policy and will, in time, be added to pre-qualification questionnaires.

The important point is to make using the facilities easy.

If you do not subscribe to the idea of cycling to work, you might be thinking, so what? However, if the government's targets for cycling growth are to be achieved, UK businesses will need to offer better facilities.

According to the second survey commissioned by BCO and conducted by Remit Consulting, 83 per cent of workplaces in the UK offer some sort of bike storage, but only 47 per cent are secure and under cover.

Neil Webster, director of Remit Consulting, says it is not just about the quantity of cycling facilities, but the quality too.

"Alongside safe storage and showers, there is a clear demand for towels, hair dryers and complimentary toiletries.

"This kind of service provision may not just encourage existing employees to cycle to work, it could also act as a market differentiator for prospective employees, and even have a positive impact on lettability," adds Webster.

Improved parking facilities could help increase the number of those cycling to work, resulting in cleaner air, healthier workers and even more attractive employers. The fundamental issue is that facilities meet demand.

Look around you as you move through the UK's cities. Nearly every residential block, certainly in London, has bikes on the balconies even though many will have a bike store on the estate.

But owing to poor design, installation and user experience, many of these facilities are underused. In social housing, this is the responsibility of FMs. To help the community and create a better environment for everyone - including cleaners and maintenance teams - the goal is to tidy up living space, keep corridors and communal areas clean and free from obstruction (bikes).

So there is a move to encourage residents to keep their bikes in the stores. On the presumption that some bicycles may be left for weeks at a time, or sometimes months during colder periods, the priorities for improvement are:

Avoid damage to bikes that may be left for long periods, while other residents access their own.

Demonstrate the facility is managed and not abandoned or misused as a 'shed', as is often seen.

George Hosegood of Turvec has some advice for FMs dealing with bike storage in residential blocks.

Evaluate the security and function of the bike racks: a safe and clutter-free area in which bicycles can be easily locked will encourage use.

Provide purpose-designed parking spaces for bikes: a specialised space remains free from items such as buggy trailers or cargo bikes, which prevent access to other racks.

Provide bike lock bars to discourage people from leaving locks on racks and free up use for all residents.