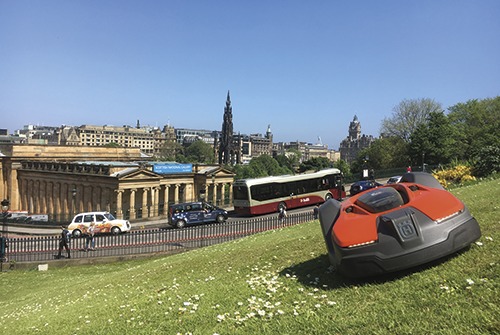  The main crematorium; and

 Two in a primary school.

Council officers felt this trial could have a significant impact on maintenance standards, environmental issues and sustainability, resources and costs. It was a chance to be involved from an early stage in the use of new technology, which if successful, could transform how the council maintains parks and green space.

Before launching the mowers, manager and staff questionnaires were completed to identify people's perceptions of the mowers and any potential problems they foresaw. It was initally feared that the mowers would either be stolen or vandalised or wouldn't be able to achieve existing standards.

The only performance issue was at the Mound site, an artificial hill that connects Edinburgh's New and Old Towns, which has a severe slope. The mower struggled to find traction on the gradient, and needed attention to restart it. The machine also needed a new traction motor and software upgrade. But it did manage to keep the standards of grass cutting required - it just required more operator time. Husqvarna had expected this site to test its limits. The mowers at the primary school location were 'interfered' with by children during the summer holidays, although neither was stolen or damaged.

Additional questionnaires were completed during the year to determine how perceptions changed. The pre-trial concerns were proved wrong as staff were surprised how well they performed and recognised that it has allowed them to concentrate on other tasks. They observed:

 Significant improvements on the quality of grass with high standards and no grass clippings.

 Reduction of other grass treatments such as fertiliser and weed control.

If used in sports areas, it would lead to a reduction in compaction owing to less heavy treatment equipment being required.

 Members of the public stop and watch and, if staff are on site, ask lots of questions.

 Children and dogs want to play with them.

 They have created a lot of public interest.

There are also environmental benefits such as reduced noise levels and no CO2 emissions.

Using the hashtag #montythemower on social media raised public interaction and comments have been encouraging .

How the robotic mowers work

1. The charging station is placed on flat ground in the middle of the cutting area out of direct sunlight, far from sprinklers and close to a power outlet.

2. The robotic mower is put on the charging station for 80 to 100 minutes.

3. Boundary wire is laid along the edges of the cutting area so the mower knows where to turn. 'Islands' of wire are put around flowerbeds and bushes to stop the mower running into them.

and set the work hours.

The trial was not large enough to give a full and accurate comparison on costs, so the first period has been more about capacity and capability rather than cost benefits. The council is looking to expand its numbers of mowers and do an in-depth cost comparison on a citywide scale. Removal of labour costs will have a big impact on grass-cutting. The next step is looking at ways to fund and/or participate in a larger trial to further test cost benefits.