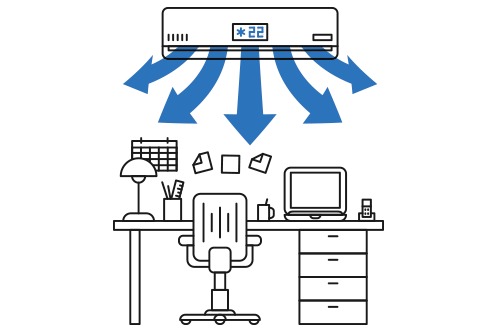 The health risks associated with low-quality indoor air from poorly maintained heating, ventilation and air-conditioning (HVAC) systems in commercial offices, schools, hotels and hospitals have been receiving an increasing amount of publicity.

Bacteria, mould and viruses in an HVAC system can be transmitted to building occupants through airflow, which may lead to health problems such as headaches, eye irritation and sore throats.

Time to clean up

For those without a regular programme of HVAC maintenance in place, there are several signs that air-handling equipment and ductwork should be cleaned.

- Dust being emitted from vents

Biofilm is a slimy accumulation of bacteria, mould, dust and other debris that forms in a moist environment such as an air handling unit (AHU) and connected ductwork.

Biofilm not only jeopardises the well-being of building occupants, it also lowers the efficiency of the AHU's cooling coil by reducing thermal conductivity and airflow. For example, 0.006 inches (150 microns) of biofilm on an AHU cooling coil will degrade performance by about 5 per cent, 0.012 inches (300 microns) by about 10 per cent and so on.

What is UVC light?

While many users opt for regular manual cleaning, a permanent solution to the challenge of maintaining HVAC hygiene is the treatment of AHU and ductwork surfaces with ultraviolet-C (UVC) light.

Ultraviolet radiation is divided into subcategories depending on wavelength range in nanometres (nm). Ultraviolet C has a wavelength range of 280-100nm and is classed as short wave radiation. This means that it is totally filtered out by the ozone layer and atmosphere and does not reach the Earth's surface.

How can UVC clean HVAC systems?

Although we are not affected naturally by UVC light, it can be artificially produced by using ultraviolet germicidal irradiation (UVGI) photonisers similar to fluorescent tubes. UVC light has twice the power of UVA (long wave) and UVB (medium wave) and is an invaluable disinfectant due to its ability to break down mould, bacteria and viruses.

UVC light has been used since the 19th century and was instrumental in the control of tuberculosis in the 1950s. UVC is powerful enough to almost eliminate biofilm while continued application stops its regrowth. It works by disrupting biofilm DNA, preventing cell reproduction and eliminating cells altogether with continued use. UVC-emitting lamps are mounted close to AHU components such as the cooling coil, permanently eradicating biofilm on the surfaces of the coil and drain pans.

Use of traditional cleaning methods, even attending to AHUs on a weekly basis, will see biofilm build up on the surfaces of the cooling cool and drain pan afterwards.

Manual cleaning can also force inorganic and organic debris into the cooling coil, exacerbating the problem that led to the need for cleaning.

With UVGI for cooling coils, the UVC light is reflected off the coil surface all the way through the coil and over a period of time will eradicate all traces of biofilm.

UVC systems can be modelled to fit new and retrofit installations. Running costs are low, and the efficiency gains from removing contaminants means the initial outlay could be recouped in energy savings within months.

UVC systems also qualify for BREEAM or LEED points on energy, water and indoor air quality and help buildings comply with legislation such as the WELL Building standard.