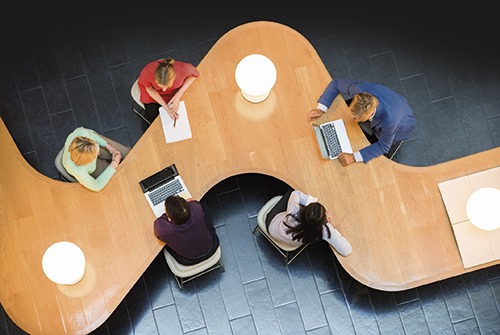 Hot-desking comes from the naval  term hot-racking - when sailors on different shifts shared the same bunk and found it warm from the previous occupant.

The same constraints of limited space, coupled with a need for new, more agile ways of working have made hot-desking a key focus for facilities and workplace managers. But it is not without challenges; Anabas's researchers have boiled them down to four.

Different departments will each have their own view on flexible working, but these can be distilled into the need for:

- Flexible location to work anywhere by remote access; and

- Flexible culture to allow users a different approach to work.

To avoid interdepartmental confusion, FMs should seek a common language with all stakeholders. This requires:

- A joined-up process so any knock-on effects from one department do not impede others; and

- Creation of agile spaces to be adapted to unpredictable demands.

This requires FMs to understand occupancy patterns and how well a building is used over time (through observations of one to two weeks). They will look at how workstations, meeting rooms, touchdown spaces and other activity spaces are used. There's a bit of maths to this. The Percentage Utilisation = (Total number of desks occupied at any hour across the working week) / (Total Number of desks x Hours observed) x 100 *.

The result is the 'desk-share' ratio, which reveals how many desks are likely to be needed to meet a 'target utilisation figure'. The target is around 80 per cent use to allow for variations from predicted patterns, which are based on averages. The three stages of occupancy to observe are:

- Someone is occupying the workstation;

- Temporarily occupied with signs of use, such as a coat on the chair.

Peaks and troughs can be studied through observation and data capture, as well as through simulation tools, which forecasts average and peak occupancy levels.

Most FMs don't start with a new-build so retrofitting a hot-desking solution is key. They should be guided by:

- Separation by floors: Research by Ben Waber at the MIT Media Lab in the US shows that engineers in the same physical office were 20 per cent more likely to stay in touch digitally compared with work colleagues located elsewhere.

- Meeting the telecoms requirements: Multiple and simultaneous users and devices can affect connectivity. FMs should consider "capacity rather than coverage" to predict how many users will be using the Wi-Fi infrastructure.

- Space planning constraints: Existing buildings will have fixed points and spaces such as reception areas.

- Catching the eye: Line-of-sight is vital in flexible working environments to encourage interaction between users. Inviting meeting areas or café settings can help.

FMs need to overcome potential resistance such as people feeling their personal space and privacy are being invaded, their status diminished or their team is being broken up. Provide reassurance that:

- There will be enough desk and storage space;

- Workstations will be easy to set up and shut down;

- Workstations will be hygienic;

- All users will be held to operational protocol.

Edward Finch is a freelance author on workplace

* Source: The British Council of Offices Guide to Post-occupancy Evaluation, 2007