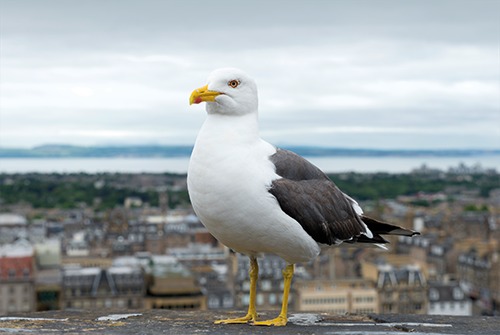 Gulls are getting smarter and that increases risk to properties. While technology is making its imprint on treating pest birds, hawking remains best practice, says David Cross of Rentokil Pest Control.

Eleven years ago, Sam, a seagull from Aberdeen became a viral sensation for stealing Doritos from his local store. Many shopkeepers and FMs across the UK sympathised with the store manager dealing with pesky gulls.

Gulls and other pest birds can be a headache for FMs who want to stop birds attacking visitors and damaging their premises.

Affectionately known as 'seagulls', lesser black-backed and herring gulls, far removed from their natural coastal habitats, are a menace in many inland towns and cities.

They eat the rubbish from overflowing bins and discarded fast-food debris on the streets. This has encouraged them to come into regular human contact - some pharmacists in Cornwall are reporting at least one patient visit a week owing to a gull attack.

One academic is studying the effects of urban environments on gull behaviour and is even considering whether their urban diet of fast food might be to blame for these tales of aggression.

Gulls favour nesting sites on roofs or other high structures where they feel safe to raise their young away from predators. Unfortunately, this can make it difficult for buildings and FMs to deter them from their premises, which provide lots of shelter.

Gulls will 'chat' to one another when someone approaches, and this communication will speed up when they feel threatened. In our experience, gulls will also chat faster when they see high-vis vests, as they have learnt that builders, scaffolders and, of course, pest controllers are a threat.

More recently, gulls have learnt that schools are easy feeding sites. The birds will wait in the fields until they hear the noises of children or the lunchtime bell before flocking to the playground. They know children will drop crisps and sandwiches.

Pests at the port

Another interesting site where we've seen gulls learn scavenging behaviour is the Associated British Ports (ABP) in Southampton. It is one of the UK's busiest vehicle-handling ports, with around 850,000 vehicles passing over the quayside each year.

Gulls learnt to drop seashells from height onto the vehicles to break them and access the meat inside the shell. This feeding habit risks damaging the ranks of new cars awaiting import or export on the estate.

Technology continues to innovate bird control. This year, a Belgian town is experimenting with a bird contraceptive pill, and the Vatican is trialling a laser beam to deter gulls from eating the Easter flowers.

At the ABP in Southampton, Harris Hawks were used to patrol the sky and successfully deter gulls from nesting.

The number of Harris Hawks flown and the frequency of flights vary with each job. This depends on the:

For example, we fly hawks on a weekly basis around Cardiff shopping centres to deter gulls from stealing food and aggravating shoppers.

Whether you're dealing with an existing bird problem or are looking to prevent one, it's important you know who to contact. Any external contractor should be up to date on the latest techniques and legislation changes in their area of expertise. Pest controllers are no different, so if you're in any doubt as to what methods to use, always check with the experts.