Design for the stages 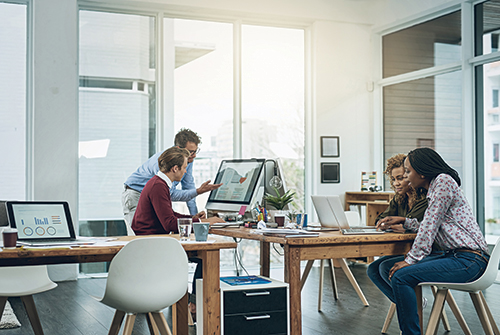 Workplace design is shifting focus from specific generations to more inclusive designs based on the different life stages of workers, explains Nigel Oseland.

To borrow from Thomas Armstrong's The Human Odyssey: Navigating the Twelve Stages of Life, there are three phases most relevant to workplace design.

The workplace community highlights the need to design for Generation Y (and now Generation Z) to attract talent.

But several protagonists (such as Neil Usher) have described such generational differences as a myth, pointing out that those entering the workplace for the first time will be enterprising and idealistic regardless of their generation.

A report from AECOM suggests that Generation Z share similarities with baby boomers and refer to them as the 'ages of freedom', including discovery, education, entertainment and exploration.

In contrast, they suggest that Generation Y and Generation X are the 'ages of responsibility', including children and mortgages. This view overlays with definitions of family life cycle, such as: young and single, young couple, newlyweds, parenthood, empty nesters and older single.

Generation Y and Generation X may be in the same phase of progressing their careers for financial stability, and expect the usual elements of a well-designed workplace.

Those seeking to be top of their profession will require the space and technology that facilitates concentration and collaboration. Those following the management route will require spaces (or tech) that facilitate team and one-to-one meetings, along with occasional confidentiality.

Creating work environments that support parents will help retain experienced, trained and talented employees by, for example, introducing flexible or part-time working hours and remote working. An onsite or nearby crèche and the ability to take occasional private calls also aids those with dependents.

Generation Z enters the workplace to learn, develop, socialise, and gain financial independence: the workplace could reflect this by offering places for concentrated work alongside places for social interaction like café areas and a fitness centre.

They may prefer to work flexible hours to suit their lifestyle and periods of peak performance, but they may not be able to work from home owing to flat-sharing, so may prefer to be in the office - closer to workmates and mentors.

The baby boomers may have new-found (financial) independence and be looking for flexible advisory work, or mentoring, and take time out for third-age learning.

In their study of demographics in the workplace, academics Jeremy Myerson, Jo-Anne Bichard and Alma Erlich point out how the physiology of older workers differs from that of younger colleagues.

Older workers may not read as well at lower levels of illuminance, but are more affected by glare; poor hearing in the high frequency range means they may not easily distinguish a specific voice when there is high background noise. In the workplace this means having more control over lighting, quieter spaces (zones or rooms) and maybe a different ergonomic set-up.

It's wise to accept that we need to create inclusive, flexible and controllable workplaces for the optimum performance and well-being of everyone in the workplace