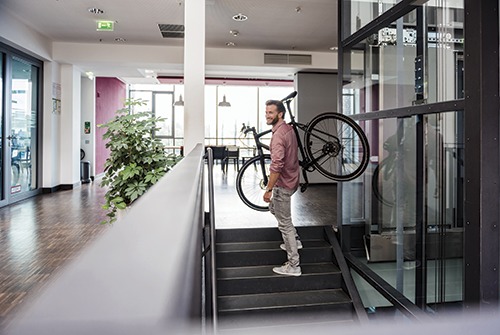 At 20 years old, Cycle to Work is one of the most successful employee benefits schemes, providing a number of business advantages, explains Gary Webb.

Cycling reduces costs for businesses in relation to company cars and business trips. Every kilometre covered costs between 40p and 60p, when all the costs are added up.

Bikes are also smaller than cars. You can park six or seven bikes in one parking space. As such, bike parking facilities require less space and can often even be set up in places where a car park isn't possible.

Cyclists are absent from work due to illness up to 50 per cent less than those that drive. In the UK, where we lose over £77 billion a year to sickness, one sick day fewer a year equates to £4 billion worth of productivity gains to the economy.

Research from Cyclescheme reveals that when employees arrive at work after a delay in their commute, there was a disruptive knock-on effect. More than half of employers said staff lost time and 46 per cent were noticeably less productive after a delayed commute. These results were in contrast to cycling, which lost 32 hours of time owing to delays over a year.

A third of the employers said cyclists were more productive at work. In addition, 44 per cent described staff who cycled as more efficient and 89 per cent said they were more energised.

A recent study by the Social Market Foundation suggested that 40 per cent of employees in the UK experience stress that they believe reduces their performance at work. As cyclists are fitter in mind and in body than other commuters, businesses can enjoy greater productivity from employees who travel by bike.

Cycling on average burns as many calories as jogging, with considerably fewer negative impacts on the joints.

When you add up the cost of running a car, including insurance, tax, fuel and repairs, commuting to work can cost over £9,000 a year. Conversely, buying a bike and maintaining it for the same period costs an average annual total cost of £396.

The principle saving to be gained using the Cycle to Work Scheme is that the payments are tax-exempt. So, exactly how much is saved depends on what tax bracket the employee is in. Either way, you get an interest-free loan for a year, which is handy for anyone.

How the Cycle to Work Scheme Works

1) Your employer joins the scheme: Employers register for free, assuming that they pay staff via PAYE. PAYE is essential, as the scheme relies on a salary sacrifice basis.

2) Pick your package: Select a package that suits your needs. You can do this by visiting the Cyclescheme calculator. Once you have a budget in mind, select a local store or online retailer with whom to shop. As we roll into the scheme's 20th year, there are hundreds of local and national retailers that support the scheme.

3) Get your gear: Your employer reviews your application and pays for your gear. You then receive an eCertificate, which you exchange for your gear in-store or online.

4) Pay over time: Your Cyclescheme benefit will appear in your payslip among other employee benefits, deducted from your salary before tax.

Gary Webb is marketing and communications director for FMP Global

London (Greater)
Up to £47,276 per annum plus excellent benefits
Reference
59097
END_OF_DOCUMENT_TOKEN_TO_BE_REPLACED