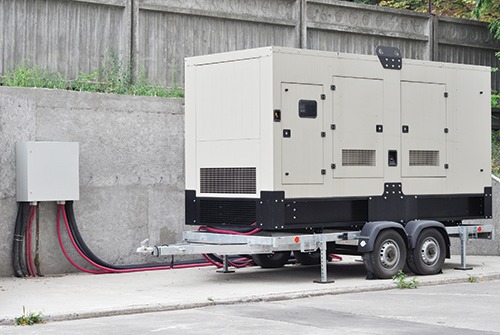 A UPS backed up by a generator will protect against extended blackouts but take heed of these key considerations, says Alex Emms.

During a data centre's normal 'mains OK' operation, incoming power flows through the UPS rectifier and inverter components before reaching the load.

The UPS provides full protection without support from the generator, which remains on standby. If the UPS control system detects an ongoing blackout threatening to its battery autonomy, it could signal the critical load, allowing it to shut down within the remaining autonomy.

Alternatively, if losing the data-processing resource is not an option, the UPS must start interacting with an on-site generator. The UPS's role is then to maintain the supply until the generator can take over seamlessly as the power source.

Assuming that the generator has been correctly sized, the UPS will accept it as a 'mains replacement' for recharging its battery and supplying the critical load until mains power is restored. This period can be indefinite, subject only to continued availability of fuel for the generator.

The generator as a standby power source

The generator comprises fuel, an engine to develop mechanical energy, and an alternator to convert the mechanical energy into electrical form. Diesel generators are usually used for base load and standby applications within data centres, so we will consider these.

The engine is similar to those in large lorries and must be well maintained with an adequate fuel supply at all times. The battery must be healthy to assure reliable starting on demand, and coolant and oil levels should be regularly checked.

The engine drives an alternator, which converts mechanical power into an alternating supply of typically either 230V single-phase or 400V three-phase. This output voltage's amplitude and stability is controlled by an automatic voltage regulator, while the frequency - usually 50Hz in the UK - is determined by engine speed which, as well as  supply frequency, are set by a governor that regulates the amount of fuel fed to the engine; more fuel equals increased speed and frequency.

An electronic governor counts teeth on the alternator's flywheel as it rotates and regulates fuel flow. Electronic governing is highly responsive and offers stable speed and frequency regulation, so it is usually specified for any standby generator intended for use with a UPS system.

A UPS standby generator should have a mains-powered engine water heater and battery charger. It must also have a communications channel informing when the mains supply fails and is restored, triggering it to start and stop accordingly. This is handled by an automatic mains failure (AMF) panel. To avoid the AMF starting the generator for every short supply aberration, set it to operate only if the mains supply fails for 2-10 seconds).

Make sure the AMF does not stop the generator and switch the UPS back to mains supply immediately after it is restored; the reconnection may be part of the utility company's fault location procedure or the result of an automatic breaker operation. The fault may still exist, causing the supply to be disconnected swiftly again.

The UPS can sense the brief power interruptions during changeovers at the start and end of the blackout, and uses its batteries to stop these interruptions reaching the load.

To make sure the generator performs reliably as a power protection component, it should be oversized to support the UPS and the air conditioning to cool equipment and emergency lighting, communications and alarm systems.

These are just guidelines, so seek advice from the UPS and generator suppliers.