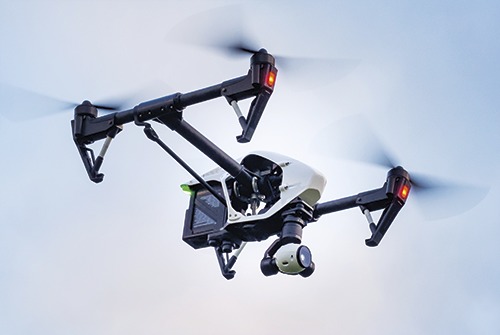 Several Tesco stores have in the past few months had to shut at night for security after unauthorised caravans occupied their car parks. The retailer then had to pay additional costs of tens of thousands of pounds to clean up the area after the travellers had moved out.

Fly-tipping is a major problem in the UK and despite new laws last year that have severely increased the penalties, fly-tipping occurs somewhere every 40 seconds. Having an 'eye in the sky' is offering organisations renewed force to combat fly-tipping, acting as a visible deterrence, but also by capturing hard evidence to be used in legal prosecutions against the perpetrators.

A case in point is what happened at a major Tesco Extra store in Kingston upon Thames. The site had recently fallen victim to fly-tipping after travellers with about 20 caravans entered the retailer's parking lot. It also had to close its doors at night as staff could not go to the police for assistance without holding proof of unlawful activity.

The retailer came to us for a solution. We thought the DJI Inspire 2 drone would do the trick. It comes with a high-quality image processing system and can travel at speeds that shift from 0 to 50 mph (80 kph) in five seconds. The battery provides a maximum flight time of 27 minutes.

Results of flying the drone

The drone pilot used the retailer's roof for safe take-off and landing and regularly launched the drone into the sky. The impact of the drone was immediate. Travellers saw they were being watched and began turning away vehicles that had come to fly-tip, and they even began reloading their own vehicles with previously fly-tipped rubbish.

Within a day the travellers had left the site, taking a large amount of their rubbish with them. The retailer still had to pay £30,000 to clear up the remaining waste and get rid of it safely, but the expense would have been far higher if the travellers had been left for longer.

Drones are giving landowners, facilities and estates managers and businesses an extra advantage now for security and protection. The deterrence value is obvious, but Tesco is also using the high-resolution footage from the drone to prosecute the individuals involved.

Important considerations when flying a drone