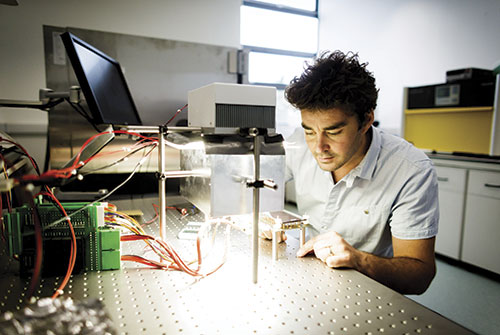 Photovoltaic (PV) solar panels are well established as a renewable energy option. But what's next? FM World spoke to Dr Chris Case, chief technology officer at Oxford Photovoltaics, a spin-off of Oxford University, about the possibilities

When did PV technology first come onto the market?
Dr Chris Case (CC): The first commercial silicon solar cells were invented in 1954 at Bell Labs in the US. The first products were called 'solar batteries' and used to power telephone systems in remote areas. For the next 20 years, PV panel applications were limited to applications such as satellites. It was the oil crisis in the 1970s that triggered the beginning of the modern PV era. Over 40 years, PV installations have grown exponentially and now about 2 per cent of energy worldwide is supplied by PV panels.

How do they work?

CC: PV or photovoltaic solar panels are traditionally assembled with glass front sheets to protect the solar cells. A typical panel contains 60 solar cells, and has an approximate overall dimension of 65 x 39 inches and can weigh up to 40 pounds. The solar cells are typically made from silicon that has been purified from sand, and operate by converting photons from the sun into electrons that can be used for electrical applications.

And the maintenance of these is straightforward?

CC: PV panels have no moving parts and have a long life with typical warranties of 25 years. The cells themselves never wear out, although the power degrades over time. For optimum performance, the panels should be cleaned regularly and any obstacles that may shade the panels should be removed. There are automated and manual brush systems to help with cleaning.

Oxford Photovoltaics (Oxford PV) was founded in 2010 after a breakthrough in solar technology using perovskite-based solar material. What is this, and why is it so exciting?

CC: We developed a coating that goes on top of the traditional silicon solar cell and boosts the efficiency by up to 25 per cent by using more of the solar spectrum. Once the coating has been applied to the silicon cell, it is assembled into a standard 60 (or 72) cell module and looks and operates like a regular PV panel. There is also an emerging market known as Building Integrated PV, where the solar panels can be integrated into buildings directly. In future, the building glass could also incorporate solar cells. The Oxford PV perovskite technology can be adapted to produce transparent PV layers on building glass that produce electricity.

One day virtually all our energy will be supplied by PV or other renewable sources.


Perovskite solar technology: what is it?

Perovskite solar cells are most commonly made using a hybrid of lead or tin halide-based material and a crystal structure. This type of cell tends to be far cheaper to manufacture in comparison with more traditional silicon solar cells.

The efficiencies of solar cells using this material have risen from around 4 per cent in 2010 to 22.1 per cent in 2016, according to the National Renewable Energy Laboratory.

Oxford PV believes this will improve the aesthetics, performance and cost of both current solar panels and BIPV systems.

Essentially, the coating can be printed directly onto office windows, which Oxford PV says would cost a fraction more than the cost of the windows or façade.

Developing perovskite thin-film solar cells has delivered a route to boosting the efficiency of current commercial cells; using a high-efficiency coating in a multi-junction or 'tandem' cell architecture.