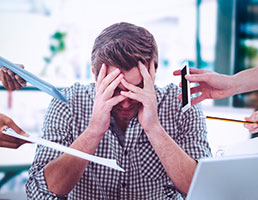 The Institute of Directors (IoD) has launched a campaign to raise awareness of mental health issues in the workplace.

The campaign, launched with the publication of a report A Little More Conversation, focuses on opening up discussion avenues for small and medium-sized businesses, which the institute says often lack the resources of larger organisations to address their employees' mental health.

The report cites Office for National Statistics and NHS Digital statistics indicating that one in six adults in the UK suffers from occurring common mental disorders - and nearly 10 per cent experience anxiety or depression.

More than half of IoD members have been approached by staff suffering mental ill health, but only 14 per cent have a formal mental health policy in place, says the institute.

Its research suggests that poor mental health could cost the UK as much as 5 per cent of GDP annually.

The report proposes that the government should trial a training scheme for small business owners to develop mental health policies in their organisations.

It also suggests that larger businesses should ensure that mental health awareness and training is more integrated here.