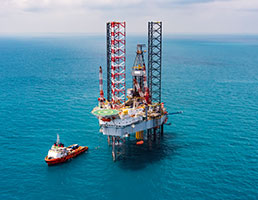 Entier, a large Scottish privately owned catering company, has been awarded £6.5 million by the Business Growth Fund to expand its overseas services.

The Westhill-based company in the north-east of Scotland plans to expand on its existing work at 38 remote locations in 23 countries. The business already has a presence in Australia, Canada, Singapore, Trinidad and Tobago, and the United States.

Revenues grew by 13 per cent in the year to 30 September 2016 to £44.9 million despite the industry downturn in the prices of oil and gas, with pre-tax profits rising by 72 per cent to £1.5 million.

More than 4,500 people on oil and gas rigs and other remote installations around the world are served meals each day by Entier's 760 staff, as well as receiving hotel services such as cleaning, laundry, recreational and welfare services with an emphasis on well-being and healthy eating.

Bruce said: "I've said in the past that I want to grow Entier into a £100 million company and, with the backing of BGF, I believe we could do far better than that.

"While the price of oil and gas remains low, offshore operators are keeping a keen eye on cost, which presents opportunities for companies like Entier because we are big enough to deliver large contracts, but small enough to work with clients to offer bespoke services on their offshore installations."

Back onshore, Entier has developed the Fresh chain of cafés across Aberdeen as well as providing catering and hospitality services in 20 client offices including Stork, Helix and Archer.

The company also recently acquired Wilde Thyme, a Perthshire-based catering firm that runs restaurants at Glamis Castle in Angus and the Glenturret Distillery in Perthshire - home of the Famous Grouse whisky brand.

The Business Growth Fund is a £2.5 billion UK-based company that invests in UK-based small and medium enterprises. It was created in 2011 by various banks in the wake of the 2008 financial crisis.