Electric-only buildings would be best policy for air quality 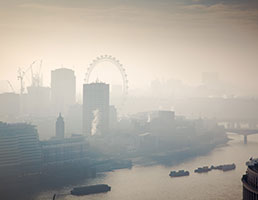 Converting all buildings to electric heating would bring more immediate benefits to air quality in UK cities than the plan for electric vehicles, according to consultancy WSP.

This would amount to around a 40 per cent reduction in emissions, a similar level to what would be achieved if all vehicles were to become electric by 2040, following today's announcement by the government to no longer sell petrol or diesel cars from 2040. In central London alone 38 per cent of NOx emissions come from buildings using gas power.

Barny Evans, WSP associate director for sustainable places, said: "Today is an important step, but it will take a long time to improve our cities' air quality by converting to electric vehicles. Alternatively, we can phase out existing gas-heated buildings today and make all new buildings electric with no cost implication and significant health benefits. It's not possible for everyone to go out and buy an electric car tomorrow, but we can mandate that all new buildings are only electric.

"When we talk about air quality and health in cities we have to recognise that electric transport is crucial but only half the solution, and one that is dictated by technology advances. It would be faster and cheaper to improve the air we breathe through sensible electric heating policies that can take effect now as the technology is already available and being used."

In 2014 WSP published a report that showed that if all transport and buildings were to become electric by 2030 in London, air pollution could be reduced by over a third, carbon emissions could be cut by 80 per cent, and noise pollution reduced significantly.