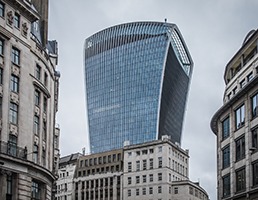 Commercial property consultancy Cushman & Wakefield has advised on a landmark acquisition that sets the UK record for a single office transaction.

Infinitus Property Investment (Hong Kong), a wholly owned subsidiary of LKK Health Products Group, advised by the consultancy, has acquired the 100 per cent interest in 20 Fenchurch Street - also known as the 'Walkie Talkie' building - for £1.2825 billion (about HKD $12.8 billion). It is the UK's largest ever office deal.

Landsec and Canary Wharf Group completed the property in 2014. The 37-storey office tower provides 713,000 square feet of accommodation and is 100 per cent leased to investment-grade tenants with an average of 13 years of income across the building.

Designed by architect Rafael Viñoly, the building also features the famous Sky Garden - now one of the capital's most popular visitor attractions.

Cushman & Wakefield introduced the deal and advised on the purchase by pre-empting the marketing campaign and placing the building under offer on a proactive basis. The transaction value surpasses the £1.175 billion the Qatar Investment Authority paid for the HSBC Tower in Canary Wharf in December 2014.

James Beckham, head of London Capital Markets, Cushman & Wakefield, said: "This record-breaking deal demonstrates the enormous investor appetite in London, and in the City's reputation as the global place to do business. Since the vote to leave the EU, capital-targeting London from the Asia-Pacific region has increased to record levels. This is partly due to currency fluctuations, but is more indicative of longer-term confidence in London and investment strategies which are not derailed by short-term political uncertainty.

"As Asian economies mature, investors there are deploying capital more broadly and London's real estate continues to be seen as the number one destination."

While the two largest deals of the year have both seen deals in excess of £1.1 billion from Hong Kong-based investors, capital from across the region is investing in London, with buyers from Singapore to South Korea making acquisitions in recent weeks.