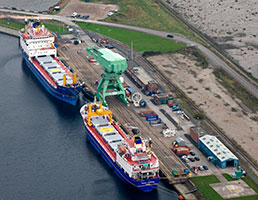 Serco has been awarded a contract extension by International Nuclear Services (INS), a shipper of nuclear materials.

Serco will continue its management of INS's fleet of specialist nuclear cargo vessels for a further four years.

The contract extension commenced on 1 April 2017 and has a duration of four years.

Serco won the original contract in 2012 following a competitive tender process.  The contract provided for options to extend the duration for further periods up to a maximum of nine years.

The contract has already been extended by one year and this extension takes the duration of the original contract to its full nine year term.  Serco has had a base in Barrow-in-Furness since 2012, where it employs a dedicated team of 17 people to look after the worldwide operations of the fleet.

The contract includes the operation and management of INS vessels on behalf of the Nuclear Decommissioning Authority (NDA) and Pacific Nuclear Transport Ltd (PNTL) and covers three PNTL vessels, as well as one vessel owned directly by NDA. It also includes support to 192 seafarers including 14 cadets, who remain employed by PNTL but with day-to-day management from Serco.

The contract is managed and operated by Maritime Services, part of Serco's Defence business, which also support the Royal Navy at its bases in Portsmouth, Devonport and Faslane. Serco is the second largest operator of UK flagged vessels, with a fleet of 109 vessels in addition to its support to INS.

INS is a wholly-owned subsidiary of the Nuclear Decommissioning Authority (NDA) and is a majority shareholder of Pacific Nuclear Transport Ltd, which has been operating out of Barrow-in-Furness for over thirty years.

London (Greater)
Up to £47,276 per annum plus excellent benefits
Reference
59097
END_OF_DOCUMENT_TOKEN_TO_BE_REPLACED