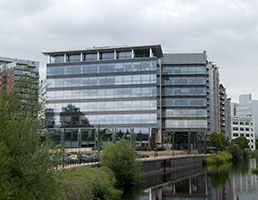 Regional office space take-up
in the UK reached 2.8 million square feet in the first half of this year, reflecting continued demand, according to property firm CBRE.

Figures from CBRE's Property Perspective H1 2017 report, which monitors 10 regional cities, show that Aberdeen, Edinburgh, Leeds and Manchester had improved levels of office take-up compared with the first half of last year.

CBRE says investment interest in the larger regional cities has also remained buoyant. However, the £1.4 billion spent on offices beyond London and the South East so far this year mean that investments volumes are down compared with last year.

The figures showed that 1.1 million sq ft of office space was acquired for occupation in units of over 10,000 sq ft in the South-East. More than a third of take-up was from the creative industries sector, which has been driving demand for flexible office space.

Locations including Reading, Maidenhead, and Watford have seen a continuation of record rents in the first half of the year, mostly driven by new developments, says CBRE.

The report says Leeds is making its mark as an alternative to London and the South-East, with office take-up of just over 237,000 sq ft in the first half of the year. Headline rents have increased but the city is still the most cost-effective location among top UK cities, according to CBRE.

In Manchester, take-up over the period was up 15 per cent year on year, as larger occupiers moved to secure premium space as good-quality stock dwindled. Limited grade A stock and a lack of completions due next year means headline rents are expected to rise.

In the first half of this year, Edinburgh had the strongest six months of take-up ever recorded by CBRE for the city, totalling just under 740,000 sq ft, ahead of last year's total. Pre-lets and lettings on schemes under construction made up 42 per cent of take-up.

CBRE national research director Andrew Marston said:  "The UK economy has continued to show resilience during the first half of 2017, though there are signs that GDP growth may be slowing as rising levels of inflation begin to influence consumer markets. With this backdrop it is encouraging to see that regional office markets have seen strength in demand maintained, with some standout take-up results seen in both Manchester and Edinburgh."

"Dynamic cities with strong underlying market fundamentals such as Birmingham, Bristol and Manchester have also continued to attract strong interest from active investors. We anticipate that fairly priced stock will continue to sell and there will be ongoing interest in markets which trade at a discount in comparison to London and the South-East."