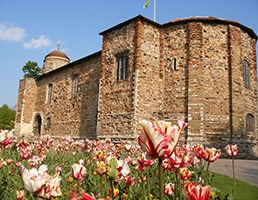 Underground storage company DeepStore has been chosen by Colchester Museum to house its archaeological archive.

As part of a 10-year contract with the museum's owner, Colchester Borough Council, the museum will store items that include bulk material such as pottery and animal bone and records and plans from excavations that have received grant funding.

The unique underground facilities were developed as an alternative use for the space created from mining millions of tons of rock salt in Britain's largest salt mine - owned and operated by parent company Compass Minerals. The mine has the capacity to extract 1.5 million tons annually, 150 metres below the surface.

DeepStore currently operates an area 700 times the size of Wembley football pitch. With the continuous rock salt mining activity, it has the capacity for expansion into an area of more than 500 million cubic feet so will never be short of space.

Tom Hodgson, Colchester Museum's manager, said: "DeepStore has given Colchester Borough Council an effective off-site solution for the long-term storage of archaeological material that needs to be retained, but is not consulted on a frequent basis."

Craig Trimby, DeepStore's head of sales, said: "The mine has consistent temperature and humidity levels and is also naturally free from ultraviolet light, vermin and flooding, making it the perfect environment for storing their historical documents and artefacts."