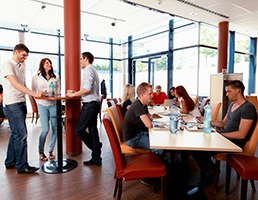 More than half of UK students (60 per cent) expect vegan or vegetarian food to be available at their university catering or retail outlets.

And a further 49 per cent expect 'free-from' foods to be available, according to Sodexo's International University Lifestyle Survey.

The report provides an insight into the lifestyles of students across the world, polling more than 4,000 students in six markets (the US, China, India, Spain and Italy, as well as the UK).

Nearly half of UK students (46 per cent) expect Fairtrade or ethically certified produce to be available at their university and 30 per cent would be happy to pay more for these items.

Sixty per cent of UK students think it is important for universities to be mindful of food waste, reducing it where possible - substantially behind India and China where 87 per cent and 82 per cent of students respectively think this is important.

Because of the increasing cost of living and rising university fees, the survey reveals that students are looking for ways to save money in their day-to-day lives - and often their social lives are the first thing to suffer. Sixty per cent of students admit they had not gone out with friends to save money, and 31 per cent had skipped a meal.

That said, eating out is still an important part of student life. Sixty six per cent of UK students eat out with friends at least once a week and 60 per cent per cent go to a café on a weekly basis.

The report also showed that a third (34 per cent) were interested in learning cooking skills as part of their university experience, and a similar proportion (32 per cent) like to hang out at their own or a friend's house once a week.

Jo Cash, European marketing director, schools and universities, Sodexo, said: "Universities have to meet greater demands from their students in relation to the catering services provided. By undertaking such an extensive study on a global level, we can learn more about students' preferences, allowing us to create offers on site that respond to these needs. This year has shown a strong demand for vegan, free-form and ethically certified produce and this reflects our experiences at the universities where we provide catering."

Based on their profiles, the report set out five types of UK students in 2017 - with 'The Healthy and Ethical Student' being one. The Healthy and Ethical Student cares about the food he or she eats and how it is sourced. Eating healthily will be on their minds, as will the university's ethics and impact on the environment. The other types of students today are 'The Sensible Student', 'The Money-Conscious Student', 'The Home Comforts Student', and 'The Career-Focused Student'.

The report can be downloaded here.

London (Greater)
Up to £47,276 per annum plus excellent benefits
Reference
59097
END_OF_DOCUMENT_TOKEN_TO_BE_REPLACED