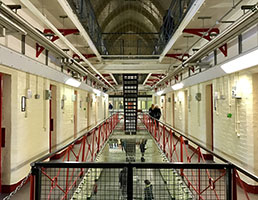 Prison officers at 31 prisons are to receive immediate pay increases, the government has announced.

The new package will mean prison officers at the 31 establishments will see a pay boost of up to £5,000, with new recruits receiving higher starting salaries. New starters will receive up to £29,500 - an increase of £5,000 - while a prison officer in London could see earnings increase to £31,000.

Justice secretary Elizabeth Truss said: "Prison officers do a challenging and demanding job day in and day out. I want frontline staff to know that their work, experience and loyal service is valued. We also want to attract the best new talent into the service, ensuring we recruit and retain the leaders of the future.

"These hard-working, dedicated staff are key to delivering our ambitious reform agenda, and it is right that we offer them greater support as we move ever closer to transforming prisons into places of safety and reform. Thousands of new learning and development opportunities which will help staff progress in their career will also be made available nationwide."

As part of a comprehensive strategy to further professionalise and upskill the service, staff who take part in the new training scheme will be required to support and mentor colleagues - handing down knowledge and supporting future leaders.

They will also be given specialist training in mental health and self-harm prevention, boosting their pay and progression in the Prison Service.

This investment supports the government's nationwide recruitment drive to recruit the best talent from around the country.

Governors at 30 prisons across the country have also been given greater freedom and flexibility to attract and recruit locally, reducing the time it takes to get new recruits through the door. Applicants will also be able to visit the prison before they take up posts, and be in touch with a mentor while the recruitment process is under way.

This wholesale organisational reform will be supported by measures within the Prisons and Court Bill, which will set out a new framework and clear system of accountability for prisons, building on the wide-ranging reforms set out in the Prison Safety and Reform White Paper.

Today's news comes just days after ministers announced a new frontline service focused on reforming offenders and cutting crime, to launch from April 2017. Her Majesty's Prison and Probation Service will have full responsibility for the operational management of offenders in custody and the community, including strengthening security in prisons, tackling extremism and building intelligence about criminal gangs.