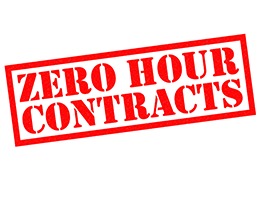 The number of people on zero-hours contracts has fallen slightly, according to latest statistics.

Figures from the Office of National Statistics' (ONS) Labour Force Survey show that the number of people employed on zero-hours contracts in their main job during April to June 2017 was 883,000, representing 2.8 per cent of all people in employment.

The figures comprises the previously published figures from the Labour Force Survey for the period April to June 2017 and the latest results from the ONS survey of businesses relating to May 2017.

People on zero-hours contracts are more likely to be female, young, part-time or those in full-time education when compared with other people in employment.

On average, someone on a zero-hours contract usually works 26 hours a week.

Just over a quarter of people (26.6 per cent) on this type of contract want more hours, with most wanting them in their current job as opposed to a different job that offers more hours.

In comparison, 7.2 per cent of other people in employment wanted more hours.