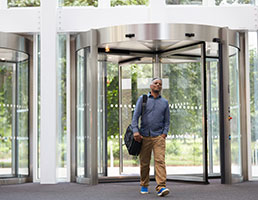 ScottishPower has become the first UK company to sign up to 'The Daily Mile' - a movement already credited with making the country's primary school pupils fitter and more focused in lessons.

ScottishPower has produced a leaflet to show its employees how easily they can exercise more.

Keith Anderson, ScottishPower's chief corporate officer, said: "Our occupational health team has been inspired by the success and simplicity of the initiative already adopted by schools.

"The move to our new headquarters in Glasgow offers the perfect opportunity to encourage over 1,600 employees to think about changing their commuting habits.

"Already, many more are either walking to work and enjoying a healthier start to the day or clocking up a 'Daily Mile' in their lunch hour," said Anderson. "Given its early success we're also launching it across all main ScottishPower sites in the UK."

Walking a mile each day has been shown to reduce the risk of chronic illnesses, such as heart disease, type 2 diabetes, asthma, and stroke. It can also help to make you feel happier, reduce stress, build self-esteem and lead to a good night's sleep.

"Scotland has been leading the way from the start," said scheme founder Elaine Wyllie. "We all know of the benefits of being physically active for our health and well-being - for children and adults both.

"ScottishPower has recognised the benefits of encouraging its workforce to be healthier and now we want other workplaces to follow suit," she said. "We know that being physically active makes employees more productive and less likely to take time off due to sickness."

Scotland was the birthplace of a scheme - a daily, 15-minute burst of physical activity that has been shown to improve children's physical, mental, social and emotional health and well-being.

The Daily Mile Foundation, working with chemicals giant INEOS, supports the Scottish Government's pledge to make Scotland the world's first Daily Mile Nation. It has already written to all schools, nurseries, colleges, and universities to encourage them to take up the scheme. Now it is writing to public and private sector companies to urge employees to walk a mile every day to improve their health, well-being and fitness.

"The Daily Mile only takes around 15 minutes so it could easily become part of workers' lunch breaks, or they could try having a walking meeting," said Campbell. "We believe The Daily Mile can help us to reduce health inequalities and the impact on our NHS."

Scottish Government figures show that in 2015, 65 per cent of adults were overweight - and almost 30 per cent were obese.