All work and no play is causing UK health crisis, says Ukactive 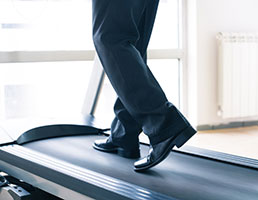 Being too busy at work is seen as the biggest barrier to being more active, according to research commissioned by not-for-profit health body Ukactive ahead of National Fitness Day on 27th September.

According to the study, more than 64 per cent of adults spend at least six hours each day sitting - at work, in front of the TV, commuting or on social media.

The study of 2,004 British adults by ComRes reveals that the average UK adult spends more than twice as much time sitting on the toilet as they do exercising. It found that British adults say they are on the loo for an average of three hours and nine minutes each week, compared with just one hour and 30 minutes spent doing moderate exercise such as fast walking or riding a bike.

The research sheds fresh light on the social barriers that are fuelling Britain's physical activity crisis, which claims 37,000 lives each year and costs £20 billion.

Perhaps the biggest barrier to a more active nation is the revelation that Britons are dangerously in the dark when it comes to health advice. The research finds that just one in 20 people (12 per cent) knows about the NHS's recommended weekly physical activity guidelines.

Meeting the recommended 150 minutes of moderate to vigorous exercise each week can lead to significant health benefits - including a 40 per cent reduced risk of type 2 diabetes, cardiovascular disease (by 35 per cent), dementia (by 30 per cent) and some cancers (by 20 per cent) - but millions of adults are falling short of this.

Ukactive's research shows that the average UK adult does 90 minutes of moderate physical activity each week, yet more than a quarter (26 per cent) do 30 minutes or less. More positively, social media appears to be playing a growing role in mobilising younger people.