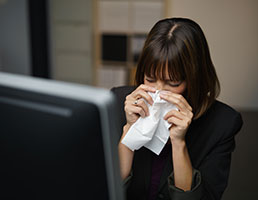 Almost half of Britain's industry leaders do not feel that enough is being done to tackle cases of work-related ill health, according to the Health and Safety Executive (HSE).

Its research also found more than two-fifths of businesses are reporting a rise in cases of long-term ill-health with the majority (80 per cent) stating tackling this growing problem is a priority within their organisation.

This news comes as HSE figures show that work-related ill health is costing the economy more than £9 billion with 26 million working days being lost, making it a priority for HSE, as the government's chief occupational health adviser.

The views of 300 major business leaders were sought and 40 per cent of respondents said their industry was not doing enough to raise awareness and tackle the causes of long-term work-related ill health.

The findings were revealed as HSE announced its new national campaign - 'Go Home Healthy'. The campaign aims to cut cases of work-related ill health by shining a light on the causes and encouraging employers to do the right thing to protect their workers.

Penny Mordaunt, minister of state for disabled people, health and work, said: "Everyone should want to have a healthy and safe environment at work. Work-related ill health is a costly issue for individuals, businesses, and the whole economy. This campaign will encourage employers to operate healthier workplaces and ensure workers get the support that they need."

HSE's chair Martin Temple said: "The survey findings confirmed what we already suspected - more needs to be done to tackle work-related ill health. Over the years, figures show that as workplace safety has improved, health has stagnated. The 'Go Home Healthy' campaign is about driving behavioural change in workplaces so we all can go home healthy. There is a moral, legal, and business case for employers to do the right thing by their workers."

Join in the conversation using #WorkRight and follow @Go_Home_Healthy for campaign updates. More information on the campaign can be found here.