15% of employees with mental health problems face repercussions at work 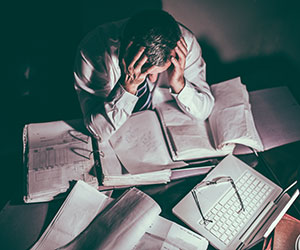 Fifteen per cent of employees face dismissal, disciplinary action or demotion after disclosing a mental health issue at work, according to a report by Business in the Community.

The Mental Health at Work report examines the findings from a YouGov survey of more than 3,000 people. The figures are almost twice the number identified in BitC's first survey of the issue published in 2016.

Although the latest report shows there have been some incremental improvements, there are still some findings from the 2017 survey that are "highly disturbing", say the researchers.

Scaled up to the general working population, this could mean as many as 1.2 million people are negatively affected for speaking out about their mental health - a truly appalling figure, states the report.

Louise Aston, Business in the Community's well-being director, said 2017 had seen "an unacceptable rise in the number of employees facing negative consequences from disclosing mental health issues including disciplinary action, demotion and dismissal, a rise of over 60 per cent on 2016".

"This is down to a lack consensus and guidance of what 'good' looks like for managing certain mental health conditions as well as a lack of training for managers and inappropriate performance management systems.

"Making reasonable adjustments for employees with mental health issues should be treated on a parity with physical health. Employers should be able to support employees to stay in work, when appropriate, and make adjustments including support with workload, revised working hours, allowing absence for treatment or opportunities to work from home, depending on the individual's needs."

She added that she was concerned the about "the way younger employees are being left behind. They consistently tell us that they are afraid to speak about mental health at work and lack the confidence to discuss it with their line manager".

Ashton said the good news was that "more people feel comfortable talking about mental health at work, more line managers recognise that employee mental health and well-being forms part of their responsibilities, and more employees believe their organisation cares about their well-being".

"But we need to make sure that this increased understanding is now turned into effective action," she said. "Achieving this ambition will require a collective effort by employers to end discrimination and deliver the best support."

Business in the Community Mental Health at Work Report 2017