UK companies need to make the Apprenticeship Levy work for them 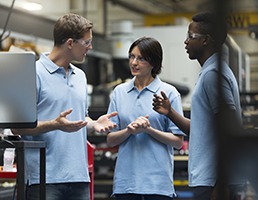 Nearly a quarter (23 per cent) of levy-paying firms have no understanding of the Apprenticeship Levy or don't know how their company will respond to it, according to research by the British Chambers of Commerce (BCC).

The BCC's annual workforce survey, held in partnership with Middlesex University London, six months after its introduction, says businesses remain in the dark about how best to use the Apprenticeship Levy.

Businesses with a payroll of less than £3 million fall under the levy threshold but can still apply for apprentice funding, yet the findings of the survey show that 66 per cent of these companies either haven't taken any direct action to use the funds or don't know about it.

The findings reinforce the need for clearer guidance and support for businesses wanting to use the Apprenticeship Levy. Firms both above and below the levy threshold are uncertain about how to use the funds to find and train the skills they need, undermining the purpose of the system.

Recently, West London College also published data suggesting that only just over a third (37 per cent) of eligible firms fully understand the initiative, with 80 per cent of respondents believing that businesses must be better engaged in using the levy.

Earlier this year a survey of senior HR leaders by recruitment agency Alexander Mann Solutions found that under half (47 per cent) of this group had sufficient information and guidance on the levy. This is despite the fact that more than two-thirds (70 per cent) believe that the initiative will ultimately create a new route into the workplace to supplement or rival graduate intake.

Tim Campbell, head of client services at Alexander Mann Solutions and a past winner of the BBC's The Apprentice, said: "While, in our experience, many major employers are embracing the opportunities created by the Apprenticeship Levy, it's concerning that too many businesses still find themselves unaware of the benefits on offer."

Campbell added: "It seems there are genuine and widespread knowledge gaps around how the levy works and employers should invest time in researching how they can make the levy advantageous to both their organisation and the emerging talent to be impacted. Those which do not risk missing out on a means to retaining existing talent, access to diverse candidate pools and government funding."