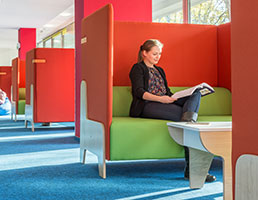 Having a 'chill-out' area at work would help with mental health issues, according to a survey.

A study of workers at 250 businesses across the UK by events company Wildgoose found that 40 per cent of respondents who had suffered mental health issues believed having a designated 'chill-out' or quiet area at work would ease the issues.

This was second only to further de-stigmatisation of mental health issues across society in general, which was cited by 47.5 per cent of respondents.

The study found that stress, depression or anxiety had resulted in 62 per cent of UK employees taking a day off work in the last year, and was having a significant impact on productivity in the workplace.

Wildgoose said the survey also revealed a substantial stigma surrounding mental health at work, with almost half of those who had taken a day off calling in sick with a different complaint.

Of those who had not taken a day off work, 43 per cent indicated that they would say nothing and carry on as normal if faced with mental health issues.

The results highlighted a disparity between how individuals perceive they would deal with mental health issues at work, and how they would handle the situation in reality, according to Wildgoose.

The study also found that women were less likely to take a day off work for mental health-related issues than men, while workers at executive level were more likely to take time off than interns of business owners.

Wildgoose said that the findings highlighted the need for employers to take an empathetic approach to mental health in the workplace, and implementation of appropriate support structures.  Team building was key to bolstering employee happiness in the workplace, according to 30% of those surveyed, it said.

Mandy Chase, HR manager at Wildgoose, said: "Findings suggest that more needs to be done throughout all levels of an organisation to encourage an open culture and foster discussions around mental health. The steps towards creating a supportive, open culture should include regular team building activities that provide tangible learning outcomes as these have been shown to enhance employee engagement and improve colleague relations."

It has pledged to support employees, raise awareness and reduce the stigma surrounding mental health within its health and well-being agenda.

FM provider Emcor UK launched a series of fundraising activities for its staff as part of its Mental Health Awareness week from 9-13 October, in collaboration with mental health charity Mind. Emcor UK started a three-year collaboration with the charity in January to raise awareness, promote understanding, and provide support to the company's 4,000 employees about mental health and well-being.