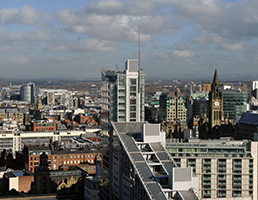 Lettings to the Government Property Unit (GPU) in UK cities outside of London have helped to drive office occupation activity across the UK's largest nine cities to their highest quarterly total on record, says real estate advisory business GVA.

With a key GPU arrangement in Edinburgh added to the figures, GVA expects what it describes as these "blockbuster" lettings to help total city centre and out-of-town take-up for the year to exceed 9 million square feet - rivalling levels witnessed at the peak of the market in 2015.

GVA is also reporting an increase in take-up of serviced office space from an average of 85,000 sq ft a year over the past five years to 320,000 sq ft just this year. The company describes this as a "step change in the demand for the sector in the regions", citing deals involving WeWork in Manchester and Instant Offices in Birmingham as being key to the emerging trend.

The consultant has compiled its figures in a report, The Big Nine, which details regional office occupier activity in Q3 2017. ?

GVA national head of offices, Carl Potter, said: "With the GPU deals providing such a boost to activity, it does beg the question how the rest of the market is performing.

"Underlying demand is proving to be robust, especially in city centres, although we are seeing some caution with an increased number of lease re-gears compared to recent years."

Including the various GPU deals, overall take-up in Q3 2017 is 58 per cent above average; but without the GPU, the above-average increase is a considerably more modest 4 per cent.

Assessing the trends, Carl Potter added: "There is an increasing shift in the way occupiers are looking to use space more flexibly as attitudes and technology change, with more co-working space requirements for the expanding knowledge sector as well as more traditional occupiers."