Two in five are paying to do apprenticeships 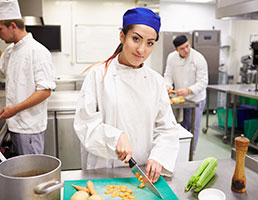 A report by Young Women's Trust to mark the midway point in the government's apprenticeship target has found that two in five apprentices spend more money completing their apprenticeship than they earn - and women face an 8 per cent gender pay gap.

The report, Young Women and Apprenticeships: Still Not Working, which draws on a survey of 500 apprentices, found that after paying for work clothes, travel and childcare many apprentices have no money left to live on. More than half of apprentices, who can be paid as little as £3.50 an hour, struggle to cover basic living costs and transport to work. Many were put off doing an apprenticeship altogether because it wasn't financially viable.

While the government strives to create three million apprenticeships by 2020, the latest official statistics show that the number of people starting apprenticeships has fallen.

The situation is harder for young women apprentices, who earn less and are more likely to have childcare costs, says the report. On average, male apprentices earn £7.25 an hour, compared with women's £6.67 - an annual difference of more than £1,000.

Pay differences are often due to gender segregation, which sees women going into sectors that are - wrongly - valued less by society and paid less. For every woman starting an apprenticeship in engineering there are 25 men, and engineering apprentices are paid on average £289 a week. Women are more likely to go into sectors like hairdressing and childcare, where the average weekly pay is £161 and £206 respectively.

Parents especially are struggling. Three in five apprentices with children say their apprenticeship costs more than they earn. A lack of part-time and flexible apprenticeships means many struggle to fit their family around work; 36 per cent of apprentices are receiving some form of state benefit while completing their training.

Young Women's Trust is calling for urgent action to make apprenticeships work for women. The charity's recommendations include:

A government spokesman told FM World : "Our number-one priority is to help young people secure work while gaining experience and apprenticeships do just that, often leading to higher paid jobs in the future. That is reflected in the minimum wage rate structure, with rate rises in April 2017 giving apprentices their second pay rise in just six months.

"The government wants to see more girls in apprenticeships in higher-paying sectors like engineering and has launched funding schemes in schools to increase female take-up of subjects like science, technology and maths."

London (Greater)
Up to £47,276 per annum plus excellent benefits
Reference
59097
END_OF_DOCUMENT_TOKEN_TO_BE_REPLACED