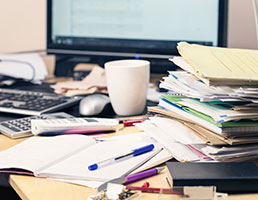 A cluttered desk and surrounding area is the reason why staff are unproductive in the workplace, say nearly half of employees.

In a bid to determine what elements distract workers from the job in hand, office power and ergonomic supplier CMD ran an independent survey asking 786 members of the public what factors would negatively affect performance at work.

An untidy workstation and visual untidiness (trailing wires, etc), received 29.4 per cent and 15.1 per cent of the votes respectively. The combined responses reveal that general 'mess and clutter' is the biggest distractor at work.

Power-related responses such as the lack of available plug sockets and lack of phone-charging options near desks brought in a combined 18.9 per cent of the answers - two areas that mattered most to the male respondents - with lack of chargers being of most significance to those in the 18-24 age bracket.

Both men and women were in equal agreement that poor lighting was detrimental to productivity, an answer that brought in the highest amount of individual votes (34.7 per cent).