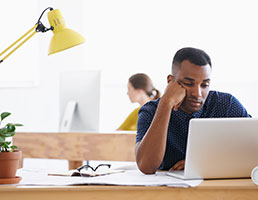 Nearly a quarter (23 per cent) of UK employees rate themselves as 'unproductive' at work, equating to seven million of the nation's total workforce, according to research by Vodafone.

The survey of more than 3,000 UK employees reveals that employers have an untapped opportunity to help boost workforce productivity.

Perceived productivity slips even further among 'Generation Z' employees (those born between the mid-1990s to mid-2000s). When asked to rate their productivity out of 10, with 10 being the highest possible number, 28 per cent of these employees give themselves an 'unproductive' score between 0 and 6, compared with the national average of 23 per cent.

The research highlights some of the steps businesses can take to increase productivity. One way to drive up productivity is for UK businesses to look at how they create a digital workplace, says the research. Nearly two in five (38 per cent) employees agree that their ideal place of work would have the most up-to-date technology on the market. Those who do have the right technology to do their job effectively, and like their job more than those who don't. Furthermore, more than half say the right technology helps them to be more productive.

Currently, however, more than two-fifths (42 per cent) of employees say poor technology prevents them from being as productive as they would like to be.

Creating a way of working that best serves the wider business and its customers can enhance employee productivity. A key part of this is where staff are getting their work done. More than half (58 per cent) of employees surveyed still work most of the time in their employer's office or building, meaning workspace remains a vital component of how effective employees are able to be.

But with 43 per cent of employees working from a customer or project site to some extent, making sure they can work effectively and stay connected to their colleagues and customers from wherever they are also helps to increase output.

The findings suggest that many businesses still have much to learn about Generation Z, despite an increasingly multi-generational workforce admitting that they need the influence of youngsters. Surprisingly, for Generation Z workers, the most important factor in making them more productive is the team around them - 74 per cent of the cohort says this, compared with just 60 per cent of 'baby boomers'. So alongside having the technology available to collaborate with their colleagues, creating a successful team environment continues to matter to people.

At the same time over half of workers (51 per cent) in the UK believe processes at work stop them being productive, while almost the same number (47 per cent) blame too many meetings. Four in 10 (42 per cent) reveal that the stress they are under is holding them back.

Tony Bailey, head of regional business at Vodafone UK, said: "Across the UK people are looking for support from their employers to help them be their best at work. While a third of employees believe they are 'very productive', there is a huge opportunity for employers to look at what changes they can make to unlock the potential of the significant proportion of the workforce who don't think they are working as well as they could be.

"Examining how and where people need and want to work is the first step to understanding where the introduction of smarter processes and technologies can bring enhancements. Each employee, job, organisation and customer will have different expectations and requirements, meaning there is no one-size-fits-all when it comes to working practices and flexibility. However, this latest research shows that both technology and teamwork are seen as important by employees of all ages when it comes to how they view their own productivity."