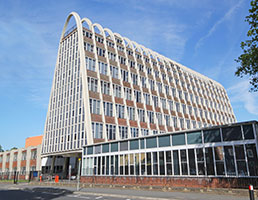 Manchester Metropolitan ranks top as the university with the most environmentally sustainable estate, according to the 10th annual People & Planet University League table.

The University of Gloucestershire was second, and Nottingham Trent University came third.

The London School of Economics is the top Russell Group university in the round-up, ranked 14th overall. The top 30 universities receive a 'first-class' degree-style classification. Imperial College London is classified as a 'fail' after ranking 141st in this year's table.

Other universities at the bottom of the table include Writtle University College and University of Aberdeen.

Top of the Scottish league is Edinburgh Napier University, followed by the University of Edinburgh. The University of Glasgow is ranked lowest for environmental sustainability in Scotland. Of the eight Welsh universities, half are ranked in the top 30, with Cardiff Metropolitan rated the most sustainable in Wales.

The idea for the university league table came from a 2003 student campaign demanding for universities to 'go green' on more than 60 campuses around the UK, and this was followed by a student research project that determined the key factors needed for a university to take action on the environment and this became the first set of criteria in 2007.

The University League ranked 154 UK universities - awarding them a first-class degree, 2:1, 2:2, Third, or fail - according to 13 criteria including environmental policy, audit and human resources, and their performance in areas such as carbon reduction, waste and water recycling, student engagement, teaching and learning for sustainable development, energy efficiency, sustainable food and workers' rights.

Hannah Smith, co-director for research and campaigns at People & Planet, said: "We had clear aims: to make transparent the sustainable development of publicly funded universities, to create competition in the sector that would drive environmental and ethical performance, and to empower students and prospective students with the understanding of whether and how an institution was taking responsibility.

"The number of universities employing environment staff doubled and in 2013 we celebrated a milestone - 100 per cent of all universities had finally set policy on their environmental impacts. Our table has consistently and unashamedly held universities to account over the last decade."

The full methodology for the research is published online here.