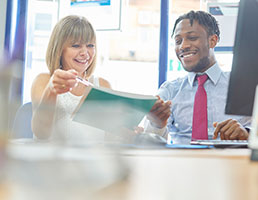 Over half of office workers would feel more comfortable and be more productive with their departmental manager sitting away from them, suggests research.

In a survey of more than 650 members of the UK public by office design and fit-out specialist Dale Office Interiors, 55 per cent say they would prefer their boss to be positioned in a private office rather than among the wider team.

One of the main reasons for this is that workers feel under undue pressure when a manager is constantly present, leading to a drop in concentration.

The findings come as open-plan workspaces see continued popularity, with more than eight million UK employees thought to work in this inclusive style of office.

In response to the question "would you prefer your boss to work in an open-plan office with you, or be in a private office?" 30 per cent of participants say they would "feel more comfortable" with their manager in a private office.

A further 25 per cent believe that they would 'be more productive' without their manager close by.

Just 14.4 per cent say their productivity would increase if their boss were more visible within the department.

But the findings also highlight some of the benefits of open-plan working. Some 29 per cent of respondents feel they would enjoy better communication with their manager in such an environment.

Interestingly, the research reveals discrepancies in the preferences of male and female employees: while men report feeling more comfortable in an open-plan space (54.3 per cent), women seem to prefer working with their manager in a private office (54.5 per cent).

Age also appeared to have an impact on responses to the poll.

For example, although employees aged between 18 and 44 express more favour towards an open-plan scheme for reasons of both better communication and increased productivity, their 45- to 64-year-old counterparts appear to perceive their productivity as higher when their manager is in a private office.

Overall, the findings suggest that designing and configuring a workspace requires flexibility. Despite the continued popularity of open-plan offices, these results show they are not necessarily conducive to the comfort or productivity of all staff.

Warren Bricknell, managing director of Dale Office Interiors, says: "The office as we have known it is becoming defunct. We need to give the users of the space - whether managers or general staff - the choice to work how and where they want to, to suit the task at the time.

"This is the way workspaces will have to go. It may be a desk or a booth, a beanbag or a conference table - but people want choice. It's about being outcomes-driven rather than having a rigid, traditional office layout and KPIs."